I've learned quite a bit about history during my travels over the years, and my recent trip to Delaware was no different.

My husband and I decided to stay at the Inn at Montchanin Village & Spa in Wilmington, not only for historical reasons, (it's among the top 10 oldest hotels in the United States), but also because of its convenient location.  Each destination, from the du Pont residence of Winterthur, to the Hagely Museum and Library and historic New Castle, is located within a 10 -20 minute drive from the Inn.

The Inn at Montchanin Village & Spa

Located in Wilmington Delaware's Greenville neighborhood is the historic  Montchanin Village & Spa. which is listed on the National Historic Register. and is comprised of 11 restored buildings that house 28 guest rooms.

The settlement, named after Alexandria de Montchanin, grandmother of the founder of the du Pont company, was once part of the Winterthur estate, and was home to laborers who once worked at the du Pont powder mills. 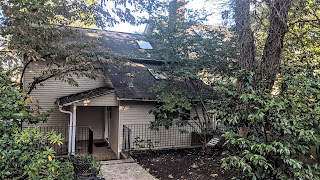 Our cozy cottage, named Tatnall, which we discovered was a college prep school in Wilmington,  included a sitting room, a kitchenette and a fireplace. 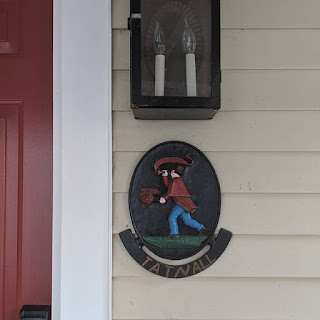 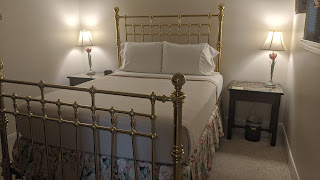 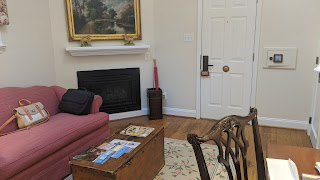 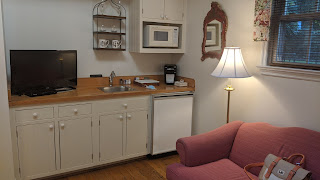 The restaurant onsite, known as Krazy Kats, operates in a  renovated blacksmith's shop and serves upscale French cuisine.  It's anything but stuffy however, as you can see by the whimsical cats that festoon the walls. Krazy Kats is open for breakfast, lunch and dinner and you don't need to stay at the property to dine there. 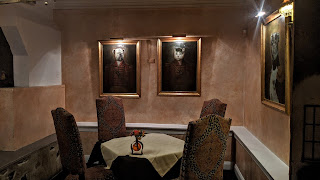 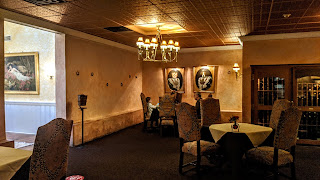 Learning about the Winterthur Estate
Jacques Antoine and Evelina du Pont moved into Winterthur (pronounced Winter tour) in 1839 when it was merely a 12-room Greek revival manor house. When the couple passed,  their nephew Henry Algemon du Pont took over property. Algemon was accomplished in his own right, having graduated first in his class at West Point, before later serving in the Civil War and being awarded the Congressional Medal of Honor for his bravery  at the Battle of Cedar Creek.  As the years went by, the house, which sits on 950 acres, continued to be passed down through the family and thus expanded. When Henry Francis du Pont assumed ownership of the property, the horticulturist and antique collector set about turning the estate into a museum.

To understand the formality of the estate under H.F. du Pont, I'll quote from an article that ran in American Heritage written by Walter Karp on H.F.  "He slept in a Queen Anne bedroom, breakfasted in a Newport Chippendale morning room, played bridge in a 'Chinese' Chippendale parlor, and dined in a Federal dining room. Footmen in knee breeches attended to the family, and the atmosphere at Winterthur was so icily formal that one kinsman of  'Uncle Harry' thought it 'too tony' to bear and resolved never to return again. In a family not noted for humility, Winterthur was regarded as markedly pretentious."

The museum boasts 175 period-room displays containing approximately 85,000 objects acquired by H.F., who continued to add to his collection until his death in 1969. Artifacts span two centuries of American decorative arts dating from 1640 to 1860.

When we visited in October, the museum had just opened on a limitted basis after being closed for months due to Covid.

One of the first things we saw, on our tour of the fifth floor after leaving the foyer, was a beautiful staircase that was brought to Winterthur from a 19th-century North Carolina plantation house.

During our October visit, we also took a tram tour of the grounds to learn more about H.F.'s love of naturalist gardens. As a horticulturalist, it was important for him to select the best plants from around the world to enhance the landscape of his 60-acre garden. We saw the vibrant fall colors of the tree leaves as they turned yellow, orange and copper. Flowers like the pink autumn crocus were still blooming and crimson crabapple fruits loved by the birds lent additional color to the landscape. Visitors who wait for spring will see even more color when the hills come alive with vibrant azaleas, daffodils, bluebells, lavender, white and pink magnolias, while summer visitors will be treated to blooming daylilies, Russian sage, hydrangeas, roses and dogwoods, to name a few.
For those touring with children, Winterthur features a children's garden called the Enchanted Woods.
In her book, "The Magic of Children's Gardens," author Lolly Tai said that the garden was created as a place where children would be encouraged to use their imagination and enjoy the beauty of a naturalistic garden. A Faerie Cottage is in the center, nestled among the oaks and poplars and is, according to Tai, "the main, unifying element of the garden." As the children walk along the enchanted woods paths, Tai said, "they will encounter garden rooms that delight them." Highlights include mushrooms that spray water in the warmer months, a Fairy Flower Labyrinth, the Faerie Cottage, an
"Acorn Tearoom," and a Troll Bridge.
The picture below appears in Tai's book and shows a child playing in the mist that emits from the Forbidden Fairy Ring and others frolicking on the Green Man's Face. 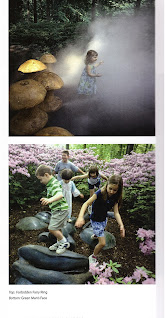 The Galleries at Winterthur 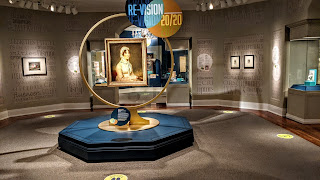 The frequently changing galleries at Winterthur are said to "enhance their permanent collection." During our visit, the main floor exhibit, "Revision 20/20, through a Women's Lens," celebrates the anniversary of the 19th amendment with items used by women who lived in the early years of the du Ponts. 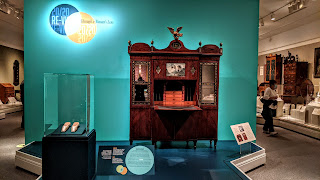 Those who know me, know I love fainting couches. (I own three). So, of course, this was one of my favorite pieces in the exhibit. The fainting couch below is estimated to date back to 1815-25. It's representative of fashion in the early republic that was influenced by ancient Greek and Roman precedents. This extraordinarily preserved New York couch represents the height of fashion, as well as a "costly expression of taste and form." 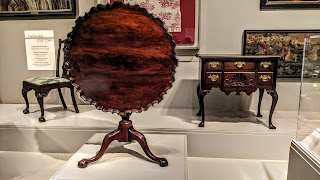 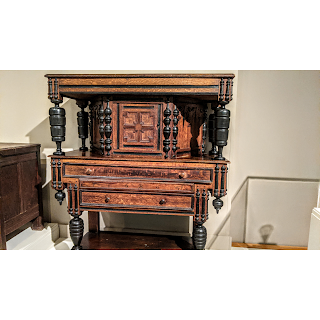 Visitors who ascend to the second floor of the gallery will learn all about the "Lady of the House," Ruth Wales du Pont. Guests will learn about her love for her husband, her devotion to her daughter, her keen sense of humor and her love of music. 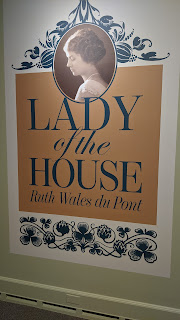 It's also been revealed through diaries and private letters in the Winterthur archives, that Ruth suffered from "melancholy" and anxiety, yet was lively and gregarious in public.
The gallery includes a reproduction of her 1916 wedding gown, personal objects like her sheet music and traveling case and more to help the observer gain an understanding of what it was like to be Ruth Wales du Pont.
The Hagely Museum 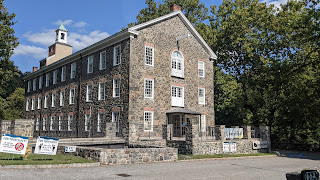 The Hagely Museum is comprised of 235 acres located along the banks of the Brandywine River and is the site of the gunpowder works founded by E.I. du Pont in 1802. Many guests think of war when they think of gunpowder, but it was used for much more, like mining and tunneling, which were extremely important in America's early years.
Guests begin their visit by checking in to the visitor's center where they can schedule a ride on a bus to take them to the powder yard to see historic stone structures that housed the manufacturing process, along with working 19th century machinery, waterwheels and turbines, black powder explosion demonstrations and more.
The workers at the powder mill seemed to be quite happy living in their little community, according to author Glenn Porter, who wrote, The Workers' World at Hagley. The book goes on to say that the du Ponts treated their workers well. An excerpt quotes a worker as saying, "The du Ponts were so nice to us. We had no fear of any du Pont. We did respect them very much." 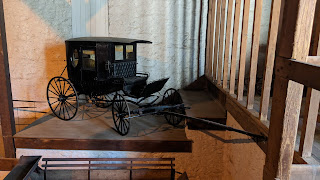 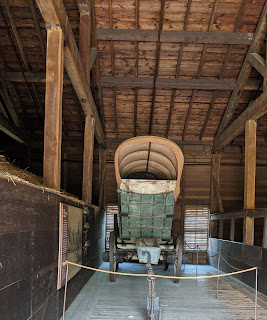 Pre-Covid, the house was available for tours, but for now, it's closed to visitors. Officials suggest checking the website in the spring.
Five generations of du Ponts lived at the house since its completion in 1803. When the home is open for tours, visitors will see it as it was when the last family member lived there--filled with furnishings, folk art and items that the family brought from France in 1799 as well later furnishings.

The Hagely Museum also hosts special events and demonstrations throughout the year. You can visit their website to learn more by clicking here.
Historic New Castle 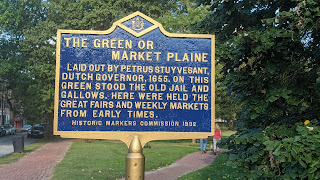 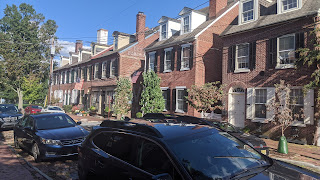 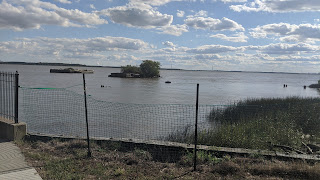 During our stay, we made it a point to visit historic New Castle. Located six miles south of Wilmington, the old city was settled in 1651 under the leadership of Peter Stuyvesant. The walkable and quaint city features a few shops and restaurants, which includes Jessops Tavern--a must see. The building dates back 300 years and was once home to a cooper named Abraham Jessop. 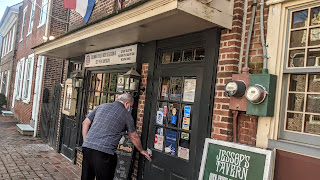 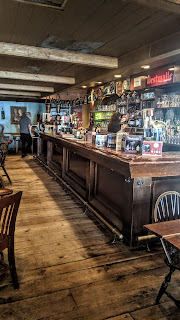 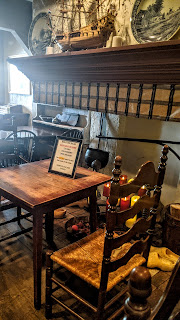 Jessop's Tavern is open for lunch and dinner seven days a week.
Other notable items for history lovers include the New Castle Court House Museum, the New Castle Historical Society and the Amstel House Museum, all of which were closed when we visited. We did take the time to walk the grounds of the cemetery there, where we saw the tombstone of George Read, signer of the Declaration of Independence. 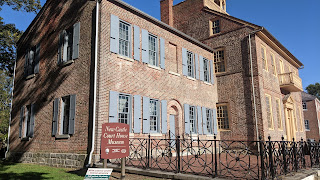 There is a modicum of retail shops in New Castle too, where one can find books and antiques. 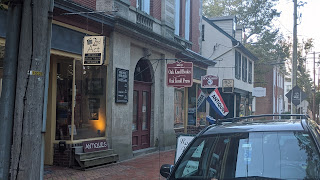 This just scratches the surface of what to see in the Brandywine Valley region, especially if you're a history lover. For more information on things to do and see, visit BrandywineValley.com .
Posted by Stephanie Kalina-Metzger at 5:37 PM