A Break from the Ordinary in Historic Columbia

Columbia, located in picturesque Lancaster County, is an area rich in history. Formerly known as “Wright’s Ferry, the small town was founded in 1726 by Colonial English Quakers from Chester County and was once considered as a choice for our nation’s capital.
For those itching to plan a day trip, Columbia doesn’t disappoint, especially for history buffs. There are historic structures to tour and old businesses to visit and even a national museum containing contents that have withstood the test of time.


View the Site of the Famous Wrightsville Bridge

The summer of 1863 was a pivotal time during the civil war. The Confederate Army invaded Pennsylvania, captured York, and set its sights on Harrisburg and Philadelphia. To achieve their goals, the Confederates plotted to cross the Susquehanna River via the Wrightsville Bridge at Columbia. Upon learning this, Union forces made the fateful decision to set fire to the Wrightsville Bridge to keep the Confederate troops at bay. The fire quickly spread, completely destroying the longest-covered wooden bridge in the world.

Today’s Columbia-Wrightsville bridge, known as the Veterans Memorial Bridge, was built in 1930 and is heralded by architectural engineers to be one of the best examples of a multi-span, reinforced-concrete arched bridge from the early 20th century. 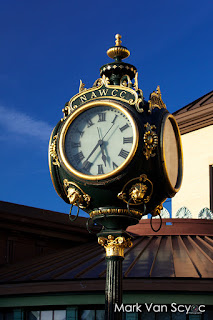 The National Watch and Clock Museum, located at 514 Poplar Street, is dedicated to the history, science and art of timekeeping. The museum houses approximately 12,000 items from all over the world, from early non-mechanical devices like water clocks and sundials, to pocket watches, tall clocks, shelf clocks, calendar clocks, novelty clocks and today’s more modern timepieces.

A short lecture and demonstration of the “Engle Monumental Clock,” is held several times a day at the museum, so be sure to inquire at the front desk for exact times. Once known as the “Eighth Wonder of the World,” the clock, crafted by Hazleton resident Stephen Decatur Engle, took 20 years to construct and was completed by 1878.

Visit a 124-year-old Business
The beloved institution known as Hinkle’s has been serving Columbia residents for years. The family owned and operated business not only dispenses prescriptions, but also carries a range of items from toiletries, to gifts, cards and holiday decorations.
The restaurant, often referred to as a “landmark among locals” is a throwback to the days of yore and elicits a tinge of nostalgia among those of a certain age.  Mike Clark, a writer and Columbia native, said the business has grown over the years. “When I was a kid in the ‘50s, Hinkle’s was a small pharmacy, with magazines and a soda fountain where you could order ice cream and cherry coke, which was my favorite.” Clark said it has since grown into the ‘town hub.’ “People from all generations get together there and talk. It’s like ‘Cheers,’ where everybody knows your name.”

The eatery, with its old-school lunch counter, reasonable prices and cozy booths in shades of teal, possesses that home-town feel of days gone by. Waitresses traverse a path between tables to serve customers breakfast, lunch and dinner. The array of items include homemade soups, sandwiches, omelets, steaks, and the popular “Shifter” sandwich. Once a favorite of the railroad workers who ran the switch engines, the “shifter” is comprised of ham and cheese, lettuce, tomato, sweet pickle and mayo. 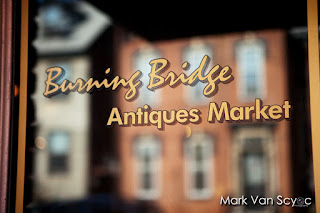 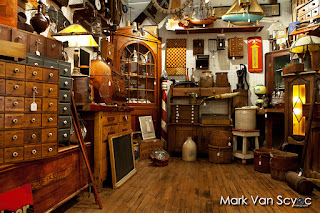 Columbia is known for its plentiful antique shops, many of which beckon visitors with “open” flags. A 20,000 square foot building located at 304 Walnut Street is particularly impressive. Named “Burning Bridge Antiques,” the business was once home to a carriage shop, a sewing factory and a hardware store. When Willis Herr and his sons heard rumors that the building was going to be razed to make room for a parking lot, they set about to save the historic structure. They succeeded, not only in saving the building, but also restoring it to its original condition. With its original pressed tin ceiling, wood flooring and American chestnut mill work, it’s a beauty to behold and is home to more than 250 vendors. 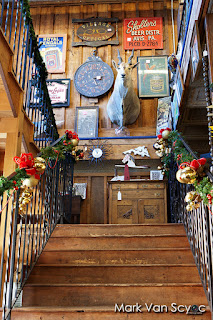 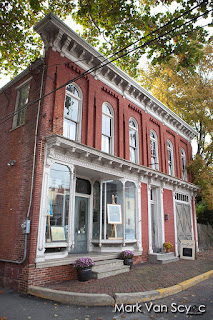 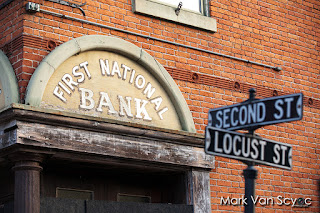 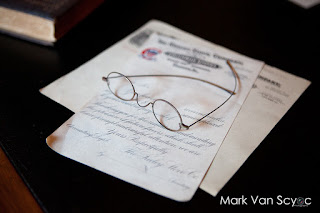 The First National Bank Museum of Columbia tells a story about the 371st bank to be chartered in the United States. Brothers Solomon and Samuel Detweiler, who opened for business in 1864 with $100,000 capital, ran the bank from the first floor of their home located at 170 Locust Street.

When the owners died, the property was passed down to other family members who eventually willed it to the Columbia Free Public Library, who subsequently put it on the market four years later.

Nora Motter Stark’s parents purchased the 6,500 square-foot property and the rest is history. “When my father purchased it in the 1950’s, my mom thought he was crazy because it was considered to be a bit of a white elephant, which had been neglected for a few years. She was a little apprehensive, but my dad saw past all of that,” said Stark.

Today, she and her husband live in her childhood home and maintain a museum where the bank once operated.  Visitors can view the custom-crafted teller cages made of black walnut and the president’s desk crafted of the same material. 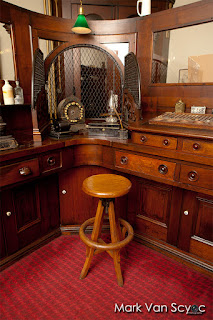 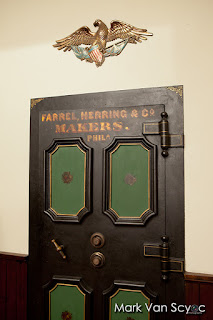 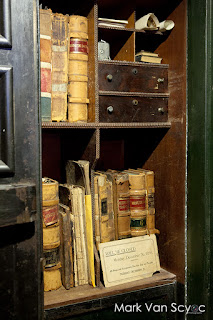 A room adjacent to the banking area is open to the public and guests can just imagine the Board of Directors conducting business around the large table which sits in front of an impressive fireplace festooned with tiles Stark believes may have been crafted by Henry Chapman Mercer. 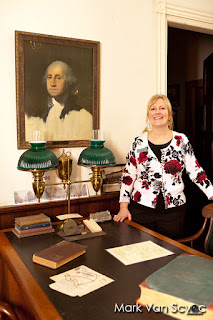 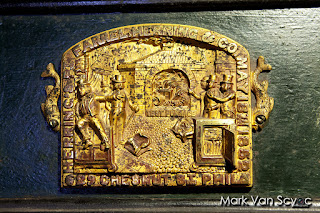 Tours are available by appointment and arrangements can be made by visiting the website at www.bankmuseum.org. Many thanks to Mark Van Scyoc for the beautiful photos. 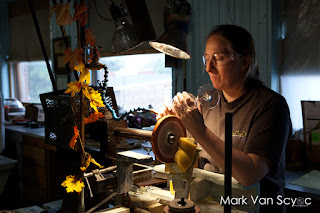 The Susquehanna Glass Factory dates back to 1910 when Albert Roye installed a glass-cutting machine in a shed behind his yard and opened for business. Two years later, his brother joined him and today the company is still going strong, operating at 731 Avenue H, not far from that original shed. 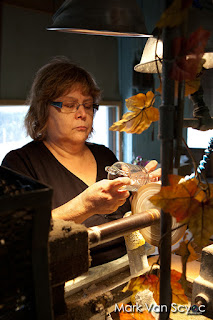 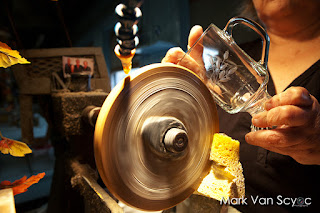 Step into History at Wright's Ferry Mansion
Those visiting the area from May through October, can tour one of the first homes erected in the area. Situated near the Susquehanna River at 38 S. Second Street, This historic property tells the story of Susanna Wright, a native of Lancashire England who immigrated to Pennsylvania in 1714 and in 1728 settled in Columbia. Her two-and-a-half story limestone dwelling is known as the only Pennsylvania English Quaker House furnished exclusively to the first half of the 18th century.
Susanna was the daughter of John Wright, who established an animal-powered ferry as one of the first means of crossing the Susquehanna River. She was versed in Latin and Italian and fluent in French. The highly respected businesswoman was also a noted poetess and scholar and friend of early Pennsylvania luminaries like Ben Franklin.
Curator Elizabeth Meg Schaefer, who authored the 304-page book titled, Wright’s Ferry Mansion, The House, said, “Wright was one of the first people in Pennsylvania to raise silkworms and, with her brother, grew flax for linen, hemp for rope and coarse cloth, hops for beer and ale and had a notable orchard. She was exceptional in her versatile intellect and the breadth of her knowledge and interests.”
Visitors will pass through the Dutch door and step into the brick entryway where they can view the formal parlor, explore the clock room used for studying, entertaining and conducting business and marvel at the kitchen with its expansive hearth and squirrel-tale oven. Upstairs, guests will get a peek into the rooms where Wright and her brother slept and where she likely raised her silkworms.

Shaefer, with her encyclopedic knowledge of Wright and the mansion, invites guests’ questions and leaves patrons with a real sense of what it was like to have lived as a prominent proponent of colonial self-sufficiency in 18th-century Pennsylvania.

On a separate note, I had the opportunity to visit West Chester a year or so ago to view the works of historical artist Adrian Martinez. Among his collection is an outstanding work depicting Susanna Wright.
The Wright's Ferry Mansion is open Tuesday through Saturday from 10 a.m. to 3 p.m. from May through October.

These are just a few suggestions to make the most of a visit to Columbia, Pennsylvania where many historic gems await.
Posted by Stephanie Kalina-Metzger at 12:19 PM