Art in the Picturesque Brandywine Valley

America has been in lock down for over a week now due to the spread of Coronavirus and, as such, many of us are suffering from a little bit of cabin fever. I work from home, for the most part, so I can't say a lot has changed for me, although April is generally when I get out and about to discover interesting places. I can't help but wonder when we'll all feel free to travel again.

That's not to say that I don't have a few stories sitting on the back burner awaiting publication. The one I'm sharing today is from a February trip to the Brandywine Museum of Art. When I visited, the historic sites were closed for the winter, but they are slated to open again in April. Those sites include the house and studio of N.C. Wyeth, Andrew Wyeth's studio and the Kuerner Farm where Andrew Wyeth created 1,000 of his paintings over a period of 77 years. 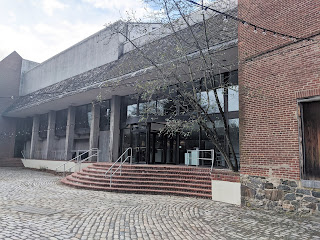 Who Is the Wyeth Family?
The Brandywine Museum of Art is not exclusively devoted to the art of the Wyeth family, but was created primarily for the purpose of displaying the work of the Wyeths, who produced three generations of artists spanning the 1900's.

Newell Convers Wyeth, otherwise known as N.C., was born in Massachusetts in the late 1800's. After attending art school in Boston, N.C. studied with Howard Pyle, who became a renowned illustrator as improvements in printing technology led to an increase in publishing. N.C. illustrated 20 children's literature classics, including Treasure Island, Robinson Caruso and Tom Sawyer. He later settled in Chadds Ford, Pennsylvania and he painted murals and worked as an art teacher. Sadly, N.C. perished in a car accident in 1945.

Andrew Newell Wyeth was born in 1917 and like his father became known for his art. Andrew developed a preference for landscapes and portraits, and preferred to work with egg tempera, or watercolor. The talented artist drew inspiration from the rural countrysides of Chadds Ford and the fishing villages of his summer home in Seacoast, Maine. Andrew died in 2009.

Henriette Wyeth Hurd studied under the tutelage of her father N.C. at their Chadds Ford studio and home. She was known for her portraits and still life paintings. Henriette died in 1997.

N.C.'s daughter Carolyn Wyeth also demonstrated a talent for art. She studied with her father for a period of 19 years and taught at the family's Chadds Ford studio. Carolyn drew inspiration from the land surrounding her and has been described as "eccentric" "excessive" and "private." She died in 1994.

Andrew's son, James Browning Wyeth, also known as Jamie, inherited his grandfather and father's talent for art and became a renowned portrait artist gaining acclaim for a portrait of the late president John F. Kennedy. James also drew inspiration from rural America, painting the people and the countryside. Jamie is now in his 70's.

The Collection
The Brandywine Museum of Art, located on the banks of the Brandywine River in  Chadds Ford, PA opened in 1971 and features more then 4,000 works in six galleries. The collection is comprised of works from some of America's first artists, many of whom made their homes in southeastern Pennsylvania and specifically Chester County.

One of the main focuses of the collection is on three generations of Wyeth artists: N.C. Wyeth, three of his artist children--Henriette, Carolyn and Andrew--and his grandson Jamie Wyeth. The historic properties located nearby (mentioned above) include the N.C. Wyeth House and Studio, the Andrew Wyeth Studio and the Kuerner Farm. All are open for seasonal tours starting in April and provide insight into the creativity of the Wyeth family whose many works of art were inspired by their surroundings.

A Few from the Collection

Thomas Hart Benton was recognized as one of the leading American Regionalist painters, whose subjects depict the everyday lives of average people, with an emphasis on rural America. Notable in the painting is how the flowers appear to wilt before the eyes of the beholder and the ripples in the drapery add movement to the "Still Life." Another interesting note on still life is that American still life paintings originated in Philadelphia.

Anna Mary Robinson, also known as "Grandma Moses," made a name for herself as an artist who, in her 70's, gained the attention of New York art dealers, with her self-taught depiction of daily life while growing up in the 19th century.

This trompe l'oeil (fool the eye) painting challenges the viewer to decide which stamp is real and which is a painting. Over time, the real stamp faded, making it easier to distinguish between the two.

Howard Pyle, also mentioned earlier, is considered one of America's most influential artists during the "Golden Age of Illustration," ranging from 1880 to about 1925, when photos then replaced illustrations in magazines.

Norman Rockwell is another artist who rose to prominence during the "Golden Age of Illustration." He is best known for the illustrations he created for the Saturday Evening Post, but he also drew for other magazines as well, including Life and The Country Gentleman.

The Wyeth family dog is pictured here, along with Andrew and his friend David Lawrence.

One of the more contemporary works in the collection is a depiction of Andy Warhol, created with "found objects" by Jamie Wyeth.

The above portrait depicts Andrew Wyeth's wife Betsy, who served as his business manager and meticulously recorded details of his many works.

Part fantasy and part memorial--this piece is said to be set atop Kuerner's Hill near Chadds Ford. Depicted on the left are the railroad tracks where Andrew's father was killed in 1945. Wyeth once joked about the painting stating, "These are all people I painted in the past, celebrating my death.When I worked with them, I raised hell with them mentally and emotionally. They wish they were dead so they wouldn't have to pose anymore."

Carolyn Wyeth, the second child of N.C. Wyeth, taught art in Chadds Ford and Rockland, Maine for more than 30 years. She was known for her feisty, non-nonsense demeanor.

George Weymouth (1936-2016) continued the American realist tradition of the Wyeth family by painting landscapes of the Brandywine Valley. He was also known for his portraiture. Through his friendship with N.C., he was introduced to Andrew, who encouraged him to try the tempera medium, which he eventually adopted as his primary medium.

New Mexico artist Peter Hurd visited Chadds Ford to study with N.C. in the 1920s. Hurd began experimenting with egg tempera, an ancient medium, which became popular for a time in the '20s and '30s. He taught both N.C. and Andrew the technique, but it was Andrew who adopted it and later mastered it. Hurd later married Henriette Wyeth.


Temporary Exhibits
Votes for Women: A Visual History is planned to run until June 7, 2020--if not longer due to the Corona Virus.

Visitors will view a film of the women's struggle to secure the right to vote. Artifacts and ephemera dating back to the suffragette movement are also on display.


The Brandywine River Museum is also featuring another exhibit called Witness to History: Selma Photography of Stephen Somerstein  which highlights voters rights.  The 1965 civil rights march from Selma to Montgomery, Alabama, included 2,000 participates who set out on March 21 along the "Jefferson Davis Highway." By the time they reached Montgomery, the marchers numbers had grown to 25,000.

When 24-year-old Stephen Somerstein heard what was taking place, he jumped on a bus from New York, arriving in time to document the final leg of the march to the Alabama state capitol. 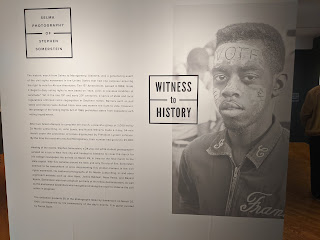 Somerstein captured photographs of Dr. Martin Luther King, Jr. and other prominent activists such as Rosa Parks, James Baldwin and Joan Baez. He also snapped portraits of his fellow demonstrators, as well as the anonymous bystanders who had gathered along route to observe the progress of the march.

The Selma exhibit is currently slated to run through June 21, although it may be extended due to the Corona virus shutdown.

Additional Amenities
The Brandywine River Museum of Art is also home to a museum shop offering art, gifts like jewelry and apparel, along with books, art supplies and more. 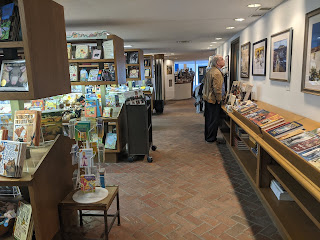 On nice days, visitors can hike the trails surrounding the property where they'll discover a variety of native plants and sculptures.

Be sure to visit their website first since the museum is currently shut down (3.24) due to Coronavirus.

The museum is located a 1 Hoffman's Mill Road, Chadds Ford, Pa. Hours of operation can be found at brandywine.org/hours. Admission if $18 for adults, $15 for seniors age 65 and over and $6 for students and children over six. Admission is free for children aged five and under.

Posted by Stephanie Kalina-Metzger at 5:12 PM