Learning about Our 34th President at the Eisenhower National Historic Site

There's a lot to see in scenic Adam's County and I've had more than a few opportunities to visit the area since it's an easy drive from my home. I've gone on hayrides, toured the Battlefield on a Segway, taken a really great food tour , studied the Cyclorama and frequented the many restaurants and farm stands. What I've neglected to do all these years is visit the Eisenhower National Historic Site located just outside of Gettysburg.  Last week, I spent a leisurely hour touring the many rooms inside and the immediate grounds outside. We are all able to do this thanks to Ike and Mamie who gifted the property to the federal government in 1967, with the caveat that the couple could live there for the duration of their lives. Today the destination is owned and operated by the National Park Service.
Choosing the Area

Eisenhower was born in 1890 in Denison, Texas, but became familiar with the Gettysburg area after his West Point graduating class visited the battlefield in 1915. This would be a busy time in Ike's life. He celebrated his nuptials the following year, marrying Mamie Geneva Doud and two years after that he was assigned to nearby Camp Colt, which was the first post to train soldiers to use tanks during World War I.

Ike's long army career kept him from putting down roots anywhere for years, so when he accepted a position as President of Columbia University in 1948, Mamie requested a permanent abode. Friends George and Mary Allen who lived on a farm in the area had nothing but nice things to say about the region, so the couple began their search.

By 1950, they had set their sights on what some have described as a "run-down" farm, for which they paid $44K. The fixer-upper wasn't without its charms. It was far enough off the road to retain a fair amount of privacy and fit the bill for Mamie's stipulation that the home pre-date the Civil War.

It would be years before the couple could move in, not exclusively due to the extensive renovations they undertook which would cost about $200,000, but also because Ike was named Supreme Commander Allied Forces Europe the year that they purchased the farm. The NATO position was very important to Eisenhower, who considered it the most important military job in the world, so he took leave from Columbia to fulfill his duties, part of which were to tour European capitals to convince them to bolster their defenses. In 1952, having completed what he set out to do in NATO, he stepped down and began two successful presidential runs, winning the presidency handily each time. The Eisenhowers began living in the house full time after President Kennedy's Inauguration in 1961.

To purchase tickets to the Eisenhower National Historic Site, first visit the Gettysburg National Military Park Museum and Visitor Center, then take the shuttle bus to the Eisenhower property. There, a guide will provide background information on the Eisenhower farm before allowing entrance to the time capsule of a home, where 98 percent of the furnishings are owned by the family.

The living room showcases gifts the couple received from friends and heads of state. They include a mother-of-pearl inlaid, black lacquer coffee table from the Republic of Korea and a silk Tabriz rug from the Shah of Iran.

The attractive marble fireplace was removed from the White House in 1873 by President Grant and was an anniversary gift from the Eisenhower White House staff. The painting of Prague above the mantel was present to General Eisenhower by its citizens at the end of World War II. According to the guide, Ike spent little time in this room, declaring it to be "too stuffy."


Mamie's love of the color pink is evident throughout the house and I found this hanging light to be especially pretty.  This is the area where Mamie asked all visitors to sign her guest book. In the curio cabinet are Mamie's knickknacks, including a presidential plate she purchased from the nearby Stuckey's souvenir stand, along with plastic figurines of presidents and first ladies that she collected from cereal boxes.

If you haven't figured it out by now, the Eisenhowers were rather down-to-earth folks. According to accounts, they preferred to dine on TV trays on the porch, but when family and friends visited, they ate dinner in the formal dining room. A tea service which guests will see on display was purchased by a young Ike for Mamie on a piece-by-piece basis with money he made on poker winnings.

Mamie believed that once a woman reached the age of 50, she was entitled to stay in bed until noon. Isn't that special? She took visitors here, met with staff members, wrote correspondence and performed other day-to-day activities while propped up on pillows.

During the years in which Mamie was first lady, it's said that the popularity of the color pink soared. This might be one reason why we see so many pink bathrooms in examples of mid-century modern homes and here in Mamie's own house.


Mamie was said to have loved it because it was flattering. She not only decorated with it, but wore it as well. One dress which made quite a splash is the pink gown studded with pink rhinestones that she wore to Ike's inauguration.

Maid's Room
This room was where Mamie's maid Rose Wood slept and worked. It, along with the kitchen and pantry, is located in the portion of the original home that was salvaged when the Eisenhowers renovated.

A few of the guest rooms at the Eisenhower abode. The most famous visitor to spend the weekend was Prime Minister Nehru of India in 1956. 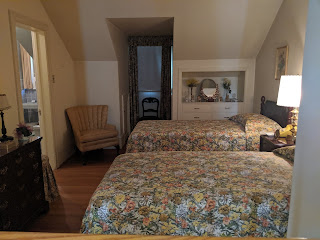 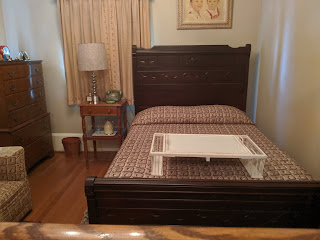 Kitchen
It's said that Eisenhower enjoyed cooking much more than Mamie. Ike, who had Pennsylvania Dutch ancestors, enjoyed making soups, stews and Pennsylvania Dutch breakfasts. He also enjoyed barbecuing outside. The person who used the kitchen the most however was Delores Moany who worked as cook and housekeeper for the couple and passed away in 2014.

The porch was the Eisenhowers' favorite room and it's no wonder since the wall of floor-to-ceiling windows allow in so much natural light and the view isn't bad either. The full effect isn't apparent since the curtains are always pulled for preservation purposes.

Ike spent many hours in his cozy den reading and playing bridge with friends. The fireplace you see here was brought in from a summer kitchen which was located near the house and wood salvaged from the original structure was used to construct the floor and ceiling.
The Grounds

Upon exiting the house, guests can take a self-guided tour of the grounds and learn more about each stop by calling in to a special number which offers additional information on everything from the secret service office, to the guest house where David Eisenhower stayed one summer while working for his grandfather as a farmhand.

Because Ike loved his golf, there is also a putting green on the property, which was installed by the Professional Golfers Association.

To get a better idea of what the outside of the property looks like, I'll leave you with this short film, courtesy of Destination Gettysburg.

As we wind down the season, it's best to call to find out when tours will be held during the cooler months. You can learn more about this interesting and enduring piece of history in Pennsylvania by visiting the Eisenhower National Historic Site here.


Posted by Stephanie Kalina-Metzger at 7:01 PM