A Journey to the "Center of the Universe" in Ashland, Virginia

I recently had the opportunity to travel to the far west end of Richmond, Virginia, to an area called Short Pump, so named for a pump that was located at a tavern built by Revolutionary War veteran Robert Hyde Saunders.

The affluent area is a shopper's paradise, with shopping malls as far as the eye can see and the Hilton Richmond Short Pump Hotel & Spa, was a comfortable and convenient basecamp for exploring the small town of Ashland, located just 16 miles away. An added attraction is that the hotel was within walking distance of  Short Pump Town Center, with 140 shops and eateries. I have to offer a warning however. If you're the unrestrained sort, who is prone to tennis elbow from whipping out the Visa, you may want to bunk somewhere else. The area is full of temptations for shopaholics! I spent a few hours at the attractive outdoor mall, enjoying the day and the plethora of  stores carrying everything from clothing, to shoes, candy, gifts and so much more. Because I knew I'd be visiting plenty of independent shops in Ashland, I decided to limit my spending, although I did buy a lovely multi-colored blouse at Versona, a women's boutique that hasn't quite made it to my neck of the woods.


Ashland takes its name from Henry Clay's Lexington Kentucky estate named for the Ash trees that grew on the property. The town is quite proud of its native son who was born in 1777 and went on to become a presidential candidate in 1822, 1834 and 1844. Known as the "Great Compromiser," Clay is credited for helping to delay the Civil War by about four decades.

The locals also refer to Ashland as the "Center of the Universe" because it is located smack-dab in the middle of Hanover County, although I suspect that the moniker also has a lot to do with the fact that the 7.16 square mile area is just bursting with small-town pride. The friendly residents who engaged me on my visit had nothing but great things to say about life in their small corner of the world.

A Railroad Runs Through It


No matter what time of day you visit, you're likely to see a train pass by since tracks run through the middle of town. The Richmond, Fredericksburg and Potomac Railroad initially developed the small town as a mineral springs resort, complete with a racetrack, back in the 1840s. In the aftermath of the Civil War, Ashland was left in ruins, so it was fortuitous that the Randolph-Macon College decided to move to the area shortly thereafter. The institution did much to rehabilitate Ashland and the Methodist-based private liberal arts college exists to this day, touting an enrollment of about 1,500. 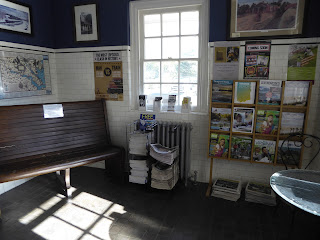 The Ashland Welcome Center, located in the Amtrak train station, has been recognized in Trains Magazine as one of the top 10 railfan spots in the country. Inside you'll find a small museum, plenty of pamphlets detailing things to do in the area and a friendly staff to help with any questions you might have about the town.

As you make your way around town, you'll find welcoming merchants selling everything from toys, to trains, jewelry, books, antiques, gifts and furniture.

Stopping for a Bite

There are several eateries in town if you're making a day of it. The Caboose Market and Cafe offers a selection of wine and beer, along with imported cheeses and snack meats and a seasonal menu featuring farm-to-table cuisine. Order one of the in-house made desserts to top things off, or save those calories and head on over to Sugar Fix, located near the historic Ashland Theatre.

Sugar Fix offers brownies, cupcakes, custom cookies, candy and more. Owner Melinda Foster started out making cookies for family and friends and in 2011 the mother of six decided to open her own business and Ashland is sweeter for it.

The Iron Horse Restaurant operates out of a century-old building and is located at the corner of Railroad Avenue. The popular spot offers lunch and dinner, with a focus on southern cuisine, seafood, sandwiches, salads and steaks. The owners are quite proud of the eatery's proximity to the railroad tracks, enticing many railfans who are eager to experience one of the best vantage points to watch traffic on the busiest rail line on the East Coast.

Another laudable lunch option is "Homemades by Suzanne." I, for one, found it difficult to pass by after experiencing the alluring aromas that beckoned me to come inside, even though I had already eaten. Suzanne must know what she's doing because she was named "Best Caterer" for five years by readers of Richmond Magazine. On the menu are sandwiches, salads, soups and more to eat in, or carry out.

Cross Bros. Grocery began serving the Ashland community in May of 1912, starting out as a small butcher shop and expanding to include additional offerings. By 1973, Cross Bros. had been enlarged four times before the family decided to sell it to two couples who recognized its importance to the community. In 2018, the business was sold again, this time to a group of local individuals committed to continuing the tradition of providing local meat, produce and groceries to Ashland. In addition to making upgrades to the building and re-branding the business as Ashland Meat Co. at Cross Bros., the group expanded its offerings to include beer, wine and prepared foods.


A Large Library for a Small Town

The town may be small, but it touts a rather large library, as seen here, and the residents of the area have Richard Gillis to thank. "Dick" served as Mayor from 1977 to 1990 and as a member of the Pamunkey Regional Library Board of Trustees from 1971-1980. During this time he was very vocal about the need for a library in the area. Gillis was also responsible for Ashland's "Center of the Universe" moniker. He passed in 2001, but is memorialized on the building, which bears his name. 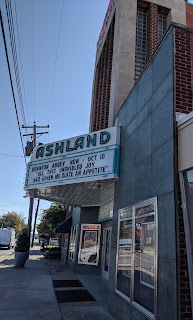 The Ashland theatre opened its doors in 1948 with "Sitting Pretty" starring Robert Young, Maureen O'Hara and Clifton Webb. The show was preceded by a cartoon, with an entrance fee of 40 cents for adults and 14 cents for children. Like most small, independent theaters, the business saw its share of hard times in an era where entertainment choices abound and was therefore forced to shut its doors in the 1990s. When the owner donated the building to the Town of Ashland in 2013, the town united to save the landmark.  A two-year overhaul began along with a  $2.1 million capital campaign and in 2018 the theatre reopened to the public. Today the venue offers movies, musical acts, other live performances and community-building events.


The attractive Georgian-style Inn located across from the Ashland Visitor's Center is popular with railfans and those who enjoy the laid back pace of life that Ashland offers. And it's hard to beat for convenience--guests can walk out the front door and be at the train station located just a few steps away.

The boutique hotel offers 11 guestrooms, two suites and several spacious porches perfect for relaxing, chatting with a friend, or simply watching the world go by.


The Tinder Guest House, located next to the Bell, Book and Candle on South Center Street, dates back to 1898, when it first operated as a pharmaceutical business.


The 2,000-foot guest house features three bedrooms and two bathrooms, a game room, an eating nook and a gathering room and is popular with families who are seeking a relaxing getaway.

Almost all of places I have mentioned are located on the "main drag,"except for the theatre and the bakery, which can be found on England Street.

I could go on about how quaint and friendly this small town is, but I'll leave it up to you to explore further. Hopefully these few tips on where to go and what to see might inspire you to do so, or, if you prefer, just reach out to the helpful staff at the Welcome Center, or any of the local merchants. I'm sure they'll be happy to assist.

Posted by Stephanie Kalina-Metzger at 7:40 PM