According to the National Society for the Preservation of Covered Bridges, Pennsylvania is home to the most covered bridges in America, with a total of 213. The state is also home to the earliest documented covered bridge. The Schuylkill Permanent Bridge spanning the Schuylkill River in Philadelphia, so named because it was expected to last 30 years, was built in 1805 for a cost of $300 by Timothy Palmer, the best-known wooden bridge builder of the time. Sadly, the bridge was destroyed by fire in 1875.
Home to 15 Covered Bridges
Closer to my home is Perry County, an area which features 15 covered bridges, all within a relatively short drive.  Perry County is part of the Appalachian Mountain Region and is bordered on the north by the Tuscarora Mountain, the south by the Blue Mountain, and the west by a convergence of the Tuscarora, Conococheaque and Blue Mountains.
The folks at Visit Cumberland Valley have simplified the process for those interested in viewing these old structures. Download the turn-by-turn directions listed on their website and you'll be on your way in no time.
Visitors can choose from between two loops. The amount of time you have to explore will determine which loop you take. Loop A covers 86.7 miles and seven bridges, while the longer Loop B covers 144.5 miles and eight bridges. Both loops begin and end at the Carlisle Fairgrounds and include stops along the way at Little Buffalo State Park for leg stretching, swimming, or maybe even a hike, or fishing for those who want to take a longer break from driving.
Along the tour, visitors will view several bridges which pass over Sherman's Creek. Adair's Bridge would be one of the oldest bridges on the tour built to pass over Sherman's Creek, had it not been damaged in a flood. Built in 1864, the 150-foot-long, 14-foot-wide bridge was rebuilt in 1919.
The Rice/Landisburg Bridge dates back to 1869 and is a bit older than the original Adair's Bridge. The 132-foot-long, 18-foot-wide bridge is open to vehicle traffic. This is a picture I took in the autumn.
Another bridge on the tour is quite new. Brook's Bridge, originally constructed in 1884, spans 70 feet long and 17 feet wide. Time took its toll on the old bridge, forcing authorities to close the structure to traffic in 1992. It was rebuilt in 2004.
Visitors who pass through the quaint New Germantown won't want to miss the bridge of the same name. Built in 1891 by John Fry, the 74-foot-long, 12-foot-wide structure with its picturesque mountain backdrop is open to vehicle traffic and perfect for photos.
Another bridge built to cross Sherman's Creek is the 174-foot-long, 20-foot-wide Dellville Bridge, built in 1889 by Andrew Clouser. The structure was destroyed in 1972 by Hurricane Agnes, only to be rebuilt by Stephen J. Esh in 1973. Unfortunately, the bridge was a target of arson several years ago. It was rebuilt and restored in 2019.
Big Buffalo Crossings, built in 1919 to cross Big Buffalo Creek is Kochenderfer's Bridge. This 71-foot-long, 18-foot-wide bridge is privately owned and closed to vehicle traffic. Also crossing Big Buffalo Creek is Fleisher's Bridge. Built in 1887 and open to traffic, the bridge is 125 feet long and 17 feet wide.
Other Crossings include Clay's Bridge, built in 1890 by George Harting to cross the Little Buffalo Creek. It is 82-feet long and 15-feet wide and was moved one mile west from its original location to where is stands today in Little Buffalo State Park.
The last and smallest bridge on the tour is the Red Bridge, built in 1886 to cross the Wildcat Creek. The 55-foot-long, 15-foot-wide bridge is located on private property and is open to foot traffic only.
Another bridge can be found on an old abandoned section of Route 274 on the left side of the road. Waggoner's Bridge was also home to Waggoner's Mill.
I took these pictures six years ago while working for the Chambersburg Public Opinion on a piece about covered bridges. These are just a few.
I was recently given a book published by the Perry County Promotional Alliance, which lists all the Perry County Covered Bridges, so I've decided to post additional bridges here, along with their attributes. 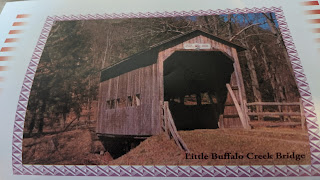 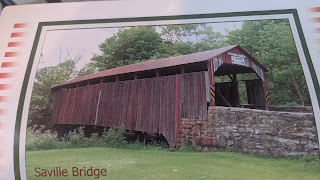 The Saville Bridge crosses Buffalo Creek and was built in 1903 by L.M. Wentzel. 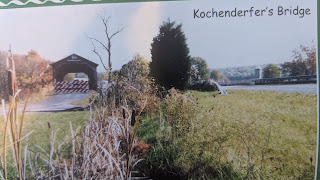 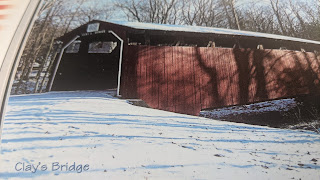 Clay's bridge was built in 1890 by George Harding and spans Little Buffalo Creek. It was rebuilt in 1959 and is open to pedestrians only. 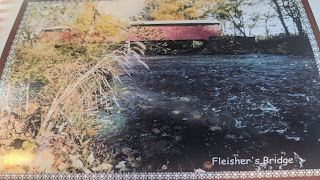 Fleisher's Bridge was built in 1887 and spans Little Buffalo Creek. The road beyond the bridge is a "no outlet" and ends at private property.
These are but some of the 15 bridges located in Perry County, which are a testament to the craftsmanship of a bygone era. In an time where traveling is tough due to the pandemic, at least we can hop in our cars and treat ourselves to the occasional change of scenery and view attractions in our local region.
Posted by Stephanie Kalina-Metzger at 4:05 PM