Visiting the Grounds for Sculpture

If you're searching for unique things to do in New Jersey, I recommend the Grounds for Sculpture. My friend and I decided to take a bus trip to the destination during the dog days of summer, which, in retrospect, wasn't the best time of the year to visit. First of all, our bus encountered heavy traffic on the way to Hamilton Township, New Jersey and and secondly, temperatures soared into the mid 90s, so we were more than a little overheated. The good news is that it was a bright, sunny day, perfect for pictures. But because we were on a limited schedule of about 90 minutes, we were able to view just about a third of the expansive collection. What we did see, however, was impressive and approachable and I'm inspired to return in the autumn when the weather is cooler.

Grounds for Sculpture Founder Seward Johnson
Seward Johnson was born in 1930 and attended the University of Maine before enlisting in the Navy and subsequently spending four years on the U.S.S. Gloucestor (PF 22), the only ship hit by enemy fire during the Korean War. Later Seward settled in New Jersey and raised a family. Seward's artistic career began with painting before his interests turned to what would later become his main body of work. His first cast work of sculpture won the Award in Steel competition, besting around 7,000 entries. He was practically self taught, unless you count a few classes he had taken in Cambridge, Massachusetts.

Another interesting fact about Seward Johnson is that his name is used in conjunction with many products Americans buy on a regular basis. He is the grandson of the co-founder of Johnson & Johnson.

Today his works are exhibited internationally in public and private art collections. His work is comprised of three series: 'Beyond the Frame,' inspired by Impressionist paintings, the 'Celebrating the Familiar' man on the street works and 'Icons Revisited' based upon images of the collective unconscious.

Arriving at the Grounds for Sculpture
The 42-acre sculpture park and museum is located at 80 Sculptor Way, Hamilton Township, New Jersey, formerly known as the New Jersey fairgrounds. Grounds for Sculpture became a nonprofit organization in the summer of 2000 and subsists on revenue from visitors, art patrons, donations and grants.

When we arrived, the first thing we encountered was a larger-than-life sculpture of King Lear as we made our way to the Seward Johnson Center for the Arts' Welcome Center. There guests can roam the galleries to view the rotating exhibits, purchase gifts at the museum shop, or grab a bite to eat at the Van Gogh Cafe. The Cafe is worth a visit, whether you're hungry or not, for the view of the ceiling alone, which is a tribute to the artist's famous "Starry Night" painting.
The second sculpture that we encountered after arriving was located at the top of a grassy hill across the street. Titled, "Confrontational Vulnerability," the reclining nude relaxes on a bed and is joined by a black cat with an arched back near her feet. The sculpture is Johnson's full-size reconstruction of Manet's famous painting, "Olympia."
Because we were short on time, we decided strike out on our own with the handy map provided at the visitors' center, which offered a breakdown of artists, the names of their works and the zones where we could find them. I also noticed that there was usually a marker near each piece, which also contained identifying information.

"A Little to the Right" deserves a mention for its realistic lines, from the folds in the sweaters, to the pleats in the skirt. I learned later that each life-size bronze takes Johnson approximately two years to complete. Johnson was said to have chosen this medium not only because bronze is strong enough to endure nature's harshness over periods of time, but also because it flows well in a ceramic mold, making details very crisp.

During our visit we encountered various bodies of water where artwork was the focal point. This piece is named "Dorian," by Bruce Beasley, who is known as one of the foremost sculptors on the West Coast. In the 1980s, Beasely created many stainless steel works such as the one pictured above.

Seated nearby the lifelike Johnson sculpture pictured above was a family enjoying a picnic on a park bench. We witnessed more than one person crack a joke about almost mistaking the family for one of Seward's pieces. I could make a bet that by the time the family was digging into dessert, they were ready to get out of there before the next clever observer encountered them.

Happening upon sculptures was almost like a treasure hunt. We seemed to discover them around corners, in ponds, atop hills, between hedges and in small clearings. This is in keeping with the founder's vision that guests should anticipate the "joy of discovery." This above tableau was located a bit off the beaten path and is called Dejeuner Deja Vu.  It is inspired by Edouard Manet's "Dejeuner Sur L'Herbe."

Once in awhile, visitors will discover that Seward Johnson doesn't always take himself so seriously, like with this piece, titled, "Has Anyone Seen Larry?" And then there's this one below, titled, "Pondering the Benefits of Exercise."

Once in awhile, I'm surprised at what I learn later about a particular artist. For instance,"Lintel" was created by the widow of Zbigniew Brezezinski, who is also the mother of Mika Brzezinski. This sculpture was constructed of cut cherry trees and then cast in bronze.

The unusal sculpture above is named "Beast," and is created by Michigan resident Karen Peterson."I have reached for pure form in depicting a setient creature that exudes power, sensuousness, nobility and sensitivity of spirit," she said about her work.

The above piece by Joan Danziger, is said to be created out of her fascination with dream imagery and metomorphosis. Danziger currently resides in the Washington, D.C. area.

While wandering around the grounds, mist would occasionally rise up and capture our attention, causing us to explore further what was located in, or around, various bodies of water. This one is called Leucantha by Philip Grausman. The American artist's early work centered on seeds and buds and this exploration eventually led to a fascination with human heads, which he has been known to describe as "landscapes." His work can be seen at the Metropolitan Museum of Art, the Brooklyn Museum and the Wadsworth Atheneum.


Another sculpture which commands attention due to the gathering mist is titled, "Part of Nature," by Seward Johnson.

I had to hold my camera way out from a copse of small trees to snap this white Danby marble creation titled, "Portal Rest," by Horace Farlowe, a North Carolina resident who was known for his architectural creations.

Artist David Hostetler is responsible for "Summertime Lady," which stands in the reflection pool near Rat's restaurant. Yes, the name is a bit odd and unsettling for a restaurant. Seward chose the appellation for a character named "Ratty," from Grahame's The Wind in the Willows, which is one of his favorite books.  Hostetler, who was born Amish in Beach City, Ohio, was known to create works honoring the female form. His career spanned more than 61 years before he passed in 2015.

Yet another piece with water as a backdrop is Seward's "Sailing the Seine," where Manet's couple is reimagined as a "Beyond the Frame," piece.

Flanked by woods, another sculpture created by Johnson is hidden just beyond the beaten path to be discovered by the curious. It's titled, "Redon's Fantasy of Venus."

Not all artwork is at eye level and guests should make it a point to be aware of their surroundings. This sculpture is located high upon a hill, among a collection of wildflowers. 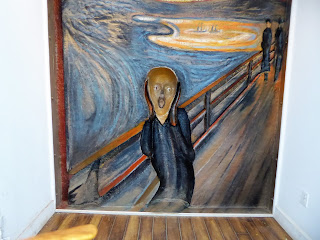 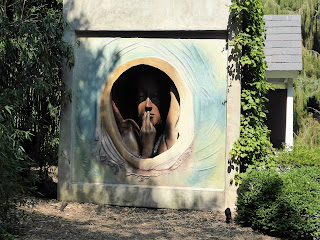 T
Once again, Seward shows his sense of humor with "The Chamber of Internal Dialogue," which is a stand-alone structure featuring a room where guests can enter and perhaps lay down on the psychiatrists couch to contemplate their existence and hope they don't end up looking like the character in "The Scream."

Just a Few of the Many Sculptures to Be Seen

These few pictures may whet your appetite for a future visit. From what I understand, there are about 250 more, most of which are on the grounds. Others are at the visitors' center, like the incredible one seen below with the eyebrow-raising backstory.
This life-sized bronze of a businessman rifling through his briefcase was installed in Liberty Plaza Park in Lower Manhattan. The sculpture became a fixture in the downtown landscape for 20 years. On September 11, 2001, a terrorist attack destroyed both towers of the World Trade Center, covering the sculpture in ash. The New York Times reported in 2004, that rescue workers approached the figure, only to realize that it was not a man, but a sculpture.

After seeing this many Seward Johnson sculptures, I realized I had encountered his work elsewhere during my travels, from the Lincoln statue in downtown Gettysburg, to the jogger at Nemocolin, the dancers in Key West and the man reading a newspaper in Steinman Park in Lancaster, Pa.
Planning Your Trip
If you go, be sure to at least allow three hours for viewing. If I do it again, I will visit when the temperatures are cooler and allot 90 minutes to stroll the grounds with a Rat's restaurant break at noon and an extra hour or two in the afternoon. Given our schedule this time, we merely scratched the surface of all there was to see in this unique gem of a destination.

To learn more about hours, prices and more, visit the Grounds for Sculpture website at: https://www.groundsforsculpture.org/

Posted by Stephanie Kalina-Metzger at 12:33 PM