Until this month, I had yet to visit any area in the small state of Delaware, other than the popular shore points. Recently, however, I had the opportunity to spend some time in the central area of the state in Kent County where I learned that there is much to do and see. Many activities are not only educational, but also inexpensive, making the region an ideal place for a family vacation. 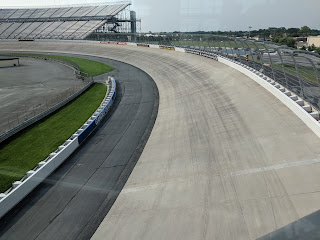 Dover International Speedway holds two NASCAR races each year. With a track known for its 24-degree turns, slick concrete surface and challenging reputation, it has definitely earned the moniker: the "Monster Mile."
For $10 a person, guests can gain access to a behind-the-scenes tour of the speedway. Highlights include the 45-foot tall "Miles the Monster" monument and the Monster Bridge, which holds 56 seats and sits 29 feet above the entrance to turn three. It has been described as the "most exciting seat in sports" and is typically reserved for VIPs, sponsors, and contest winners.

Tours are held at 10 a.m. on Thursdays and begin and end in the ticket lobby. Due to construction, tours are on hold and will resume on October 17.

What little boy hasn't played with airplanes? A trip to the Air Mobility Command Museum on Heritage Road on the grounds of the sprawling Dover Air Force Base will have children staring in wide-eyed wonder as they get up close and personal with 30 airlifters, refuelers, jets, helicopters and gliders housed in a historic WWII hangar. Best of all, it's free for the whole family.

Exhibits tell the story of humanitarian and war efforts that United States' citizens undertook to support our country. Budding aviators aged 10 and older can get in on the action by testing their skills in a free flight simulator where volunteers provide tips on take-off, flying in a pattern and landing.


Visitors can climb aboard Air Force 2 for an inside glimpse of how our nation's leaders travelled. These aircraft are usually reserved for Vice Presidents, but this particular one shown above and retired in 2011 also carried Bush senior and junior, Bill Clinton and Ronald Reagan.

Also on display is the C-5, known as the Air Force's largest strategic airlifter, which is capable of carrying cargo further than any other aircraft and has a jaw-dropping 51,000-gallon capacity gas tank, which enables it to fly a little over 7.2 thousand miles. Guests will have the opportunity to inspect the interior of the plane that has been used not only in the Vietnam War, Desert Storm and Operation Enduring Freedom, but also in humanitarian missions during earthquakes, tsunamis and hurricanes.

One of my favorites is the B-17G Flying Fortress, which was America's most famous bomber during WWII. More than 12,000 were produced for combat. Only 40 remain in museums, a dozen of which are in flying condition.
Every third Saturday from April through October, the museum hosts Open Cockpit Day, which allows the public full access to many of the museum's aircraft from 10 a.m. to 3 p.m.

The museum is open Tuesday through Sunday from 9 a.m. to 4 p.m.

Guests can spend hours at the First State Heritage Park Historic Sites located in the state's capital city of Dover. Stop first at the Welcome Center at 121 Martin Luther King, Jr. Boulevard, North, to learn more about any of the 12 sites that are part of the "first urban park without boundaries." Among them are the Old State House, the John Bell House and the Johnson Victrola Museum.

The Old State House
The Old State House is free and open to the public and is located on Dover's Historic Green. Built in 1791, it served as Delaware's capitol building until 1933. Guests can imagine cases of yore being tried in the 18th-century style courtroom on the first floor, or laws being passed in the chambers of the state legislature on the second floor.

One of the more interesting architectural details includes a geometrical staircase designed by John Howe in 1791 and reproduced by restoration architects based on information found in both the building itself and in early documents.

The John Bell House is the oldest wooden structure on The Green and serves as a starting point for outdoor walking tours where visitors can learn more about the history of Dover.
The Johnson Victrola Museum
The Johnson Victrola Museum located at 375 S. New Street provides guests with information on the sound recording industry from the 1890's to 1929 and honors Dover native Eldridge Reeves Johnson who founded the Victor Talking Machine Company in 1901.

One fact that I found interesting as I learned more about Johnson is that he used his profits from the Victrolas to sign popular music acts so that people would buy records and then use his invention to play them.

The impressive collection of Victrolas is interesting and enlightening. Guests will learn the origination of the term "Put a sock in it," and the prices of these early "talking machines," some of which doubled as rather elaborate pieces of furniture and cost thousands. The picture below was said to be Johnson's favorite. Named "The Monarch," it was in production from 1901-1905 and sold for $35-$40. 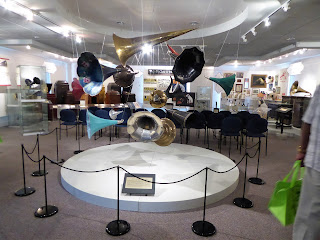 Johnson's company made millions until he retired in 1927 and the company was sold to RCA two year's later.
The Johnson Victrola Museum is open from Wednesday to Saturday from 9 a.m. to 4:30 p.m. Admission is free.

Located about a half-hour drive away on the eastern coast of Kent County on the Delaware Bay in Smyrna is a 15,978-acre refuge where guests can lay eyes on a wide variety of wildlife. Visitors have reported seeing Cooper's Hawks, Egrets, Bald Eagles, beavers, turkey vultures, barn owls, red foxes, bluebirds, wood ducks, deer, geese, mink, muskrats and more.
Stop at the visitor's center to learn more about the observation towers and the five walking trails on the property, or to sign up for the 12-mile wildlife drive, which is another inexpensive, educational activity at just $4 a car.

Guests who have visited the wildlife refuge consider early spring and late fall to be ideal times to visit to avoid mosquitoes and other pesky bugs, but bug spray and long sleeves can do a lot to alleviate those issues during the warmer weather.

To learn more about the Bombay Hook Wildlife Refuge and hours of operation, visit their website by clicking here.

Pick Your Own Fruit

Fifer's Orchards is a family-owned business located just west of Dover at Camden-Wyoming Delaware. This is a special year for the Fifer family as they celebrate 100 years in the business.

Fifer's offers an activity that is fun for the whole family called the "U-Pick Experience," where guests can visit the Farm and Country Store and be provided with directions on picking strawberries, blueberries, peaches, apples and pumpkins.

To learn more about Fifer's hours and events, visit their website here.

Mark Your Calendar for a 10-Day Fair
If there was ever a time to make it a point to attend the famous Delaware State Fair in Harrington, Delaware, it's now. This year promises to be extra special as the fair celebrates its centennial.

Additional attractions include a Demolition Derby, agricultural exhibits, an ice-skating arena, amusement rides and carnival games. Children, in particular, will enjoy the petting zoo and the racing pigs. The"Touch a Truck" event, which allows kids to interact with a collection of large vehicles, is sure to be a hit. Also, on tap is a large T-Rex that roams the grounds and interacts with fairgoers.

These are just a few of the many highlights that the state fair has to offer. To learn more, visit their website by clicking here.

If these recommendations aren't enough, you'll also find plenty of waterways in which to kayak, fish and enjoy other outdoor adventures.

These are just a few recommendations for family fun in Kent County Delaware. For a wide variety of low cost activities, Kent County is hard to beat.

Posted by Stephanie Kalina-Metzger at 8:37 PM