Rockets, Alligators and Roseated Spoonbills on NASA Land in Florida

As the saying goes...the best-laid plans of mice and men often go awry (h/t Robert Burns). Such was the case during a short trip to Florida's "Space Coast" in mid March. Our plans were rather simple: to visit the Kennedy Space Center and view wildlife via kayak. More on that later. Suffice it to say that the kayak trip was scuttled, but we did enjoy viewing a few shuttles.
Having a Blast at the Kennedy Space Center

Located approximately 60 miles east of Orlando in Cape Canaveral is the Kennedy Space Center. Built in 1967, The Kennedy Space Center attracts approximately 1.5 million visitors per year. Tickets are currently priced at $57 for adults and $47 for children aged 3-11 and parking is free. Guests might experience a bit of a hike from the parking lot to the main complex, so comfy shoes are suggested.

The first site visitors encounter is the "Rocket Garden,"which sets the stage for what's to come.
Exhibits are located both indoors and outdoors and are grouped according to "Mission Zones" and organized by era.  Those who want to make a day of it can purchase food from the casual onsite cafes, or kiosks. Our time constraints forced us to prioritize, so we missed the guided tours, as well as the current IMAX movies, which play hourly and include"Journey to Space," a 2015 3-D film sharing NASA's plans for the future and "Hubble," a story of seven astronauts who travel aboard the Space Shuttle Atlantis to repair the famous telescope.

Those who are interested in viewing launch sites, NASA restricted areas, and current working facilities, can take the Kennedy Space Center Bus Tour, which is included in the price of admission. During the 40-minute excursion, a knowledgeable guide explains stops along the way, from the Vehicle Assembly Building, also known as the largest building in the United States by volume, to  launch facilities and other interesting, behind-the-scenes goings on at NASA.

At the conclusion of the 40-minute tour, guests are dropped off at the Appollo/Saturn V Center to view the Saturn V, also known as the largest rocket ever flown.


After touring the Saturn V Center, we caught the bus back to the main complex to take in a few more exhibits before leaving.
We spent a half day at the center and still, there was so much more to see. A few things I would have done if I had more time: view the IMAX movies, join the guided tours and experience a simulated shuttle launch in a pilot's seat where a line of children awaited. Watching a real shuttle launch would be certainly be fascinating and with enough pre-planning, it's doable. Launches can be viewed at the Space Center, at the Canaveral National Seashore, or at the Cocoa Beach Pier, to name just a few alternate places to watch. A launch schedule can be seen here.

From a Rocket Park to a Wildlife Lark

My husband and I fully intended to view wildlife, and perhaps encounter a manatee, from the bow of a kayak. We arrived at Cocoa Kayaks in Cocoa Beach to prepare ourselves for a 2.5 hour expedition.  We suited up--life vests fastened, wet bags sealed, bug spray applied and soon we were off, with the help of our friendly guide, who pushed us off into the murky waters. Within five minutes, however, I realized that our kayak was different than the ones I experienced paddling down the Swatara Creek in Pennsylvania, or gliding along on this delightful trip to a WWI ship graveyard in Mallows Bay, Maryland.

It seemed like every time either one of us made the slightest move, the boat would jerk back and forth, as if it would tip over at any given second. Heck, I couldn't even raise my voice without feeling as if I was going to capsize and if you know me, I can't be quiet for long. I don't recall the depth of the water, but I did know that I'd rather be observing the fish, than swimming with them. I lasted a full five minutes before bailing, much to the surprise of our flabbergasted guide.

I suppose I learned a valuable lesson, which is to question every outfitter before I decide to take to the water. I need to sit in a vessel, rather than perch atop one. When the outfitter called us, I explained this and she assured me that it would take a lot to tip one over--which is kind of surprising, but I wasn't ready to chance it. No more "sit-on-top" kayaks for me.

A Change in Plans

Determined to view wildlife in a less harrowing manner, we began searching on the internet and learned that the Merritt Island National Wildlife Refuge was just a short drive away, so off we went to see what we could see.

The first stop was the Visitors' Center where we sat for a short film describing the wildlife that calls the island home. What we learned, much to our surprise, was that NASA, needing ample space for their rocket program, decided to preserve the land surrounding it by designating it as a wildlife refuge. What the film focused intently on was the Florida Scrub Jay, which is classified as "threatened" under the Endangered Species Act. We lacked time to walk the Scrub-Jay trail, but we did learn that the friendly birds appoint a "sentry" to perch on tall structures to scout for hawks and warn the others of impending danger. Later, in another part of Cocoa Beach, we spotted one doing his duty and standing guard atop a tall tree.

People come from miles around to visit the center, see the exhibits and browse the wildlife books in "The Bookery" before moving on to view the wildlife in its natural habitat. One of the more interesting experiences we had while there was listening to a tough-looking group of bikers speaking French while examining the various exhibits.

A helpful hint if you decide to add the Merritt Island National Wildlife Refuge to your Florida itinerary: Don't miss the boardwalk trail. The  quarter-mile loop features alligators and turtles in freshwater ponds, a native butterfly garden, interpretive signs, feeders that attract songbirds like painted buntings, screech owl boxes which allow viewing of the Eastern Screech owl and large Osprey nests, which can be viewed through a scope during nesting season.

The Black Point Wildlife Drive
For $10 a vehicle, explorers can purchase a day pass to spend as much time as they want on a seven-mile dirt road surrounded by marsh impoundments and pine flatwoods. We joined about seven other cars on the day we took the drive, being careful to hug the side of the road when we stopped for pictures so that other cars could pass.
What we saw was an interesting array of wildlife, from waterfowl, to wading birds, to alligators, roseated spoonbills and more. 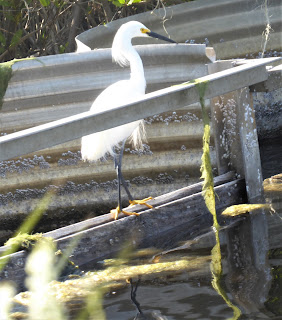 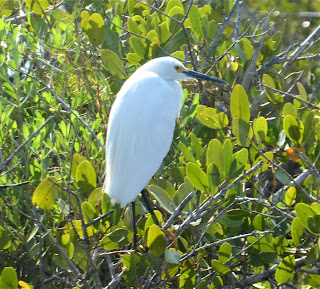 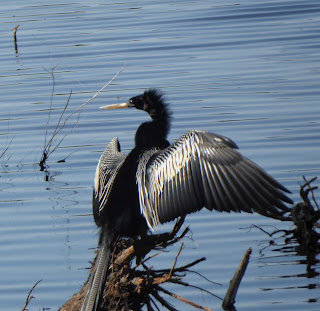 If you take the scenic excursion, be sure to allocate at least an hour since you'll want to stop and take pictures. The place was popular with photographers toting expensive cameras and waiting patiently for just the right shot. If you have a comparatively inexpensive digital camera as I do, you may need a decent zoom to capture clear pictures of the wildlife that can be seen in the distance.

We really enjoyed our stay in Cocoa Beach at Lost Inn Paradise, a small, gated enclave with a swimming pool, marina and comfortable accommodations located about a half-hour's drive from the Kennedy Space Center.

This home away from home was located on the Banana river on the narrowest strip of Cocoa Beach, with plenty of shops and restaurants just minutes away. The best part is that we could walk across the street to the beach. .
Exploring the Cocoa Beach area was fun in mid-March, but if you put a priority on spending your days in the sun and surf, I'd recommend waiting another week, or two; it was just a bit too chilly to take advantage of the water that surrounded us while we were there, not that it mattered. There were plenty of interesting things to do and see in the area and our trip was over before we knew it.
Posted by Stephanie Kalina-Metzger at 8:03 PM