A Stay at an Amish Tobacco Farm-Turned Luxury Inn, Paired with an Over-the-Top Meal

I'm a big fan of Valentine's Day, mainly because requests that are shot down during the rest of the year have a better chance of making it past the "absolutely not" stage. I have to thank my husband for his indulgences in this area and for recently treating me to an item that was on my bucket list--a dinner at TÈ restaurant at the Inn at Leola Village located in Leola, Pennsylvania.

TÈ is located within an hour's drive from me in Lancaster County and is particularly special because it is one of the few restaurants in the United States that holds both a AAA Five-Diamond Award and a Forbes Travel Guide 5 Star Award.

To further guild the lily, he arranged a stay at the Inn at Leola Village in one of the most unique rooms on the property, the historic "Wine Cellar," which dates back to 1867 and was once part of the original farmhouse which is still there to this day.

The Inn at Leola Village
When Deborah Shirk and her husband, architect and chef John Calabrese, announced that they would be creating an upscale inn and restaurant in the heart of Amish country, area businesses scoffed and told them it would happen when "pigs fly." The couple, undaunted, proceeded with the project and showing their sense of humor, even adopted the flying pig as a mascot. If you visit the Inn, you'll see the winged creature represented throughout the property, often in some unlikely places.

The Inn at Leola Village, listed among the Historic Hotels of America, has received its share of awards and accolades since opening in 1999. It was named Best Meeting Venue by Pennsylvania Meetings & Events Magazine (2017) and recently received the Four Diamonds Award of Excellence (2018). The Inn was also recognized by The Knot as a Hall of Fame Designee (2018) and was nominated as Best Historical Hotel by the Historic Hotels of America (2018).

Sixty-two guest rooms are spread across seven buildings, with four buildings original to the property. Overnight guests can select from several restored antique homes, a restored tobacco barn, and other tastefully appointed accommodations, including my favorite--the wine cellar. 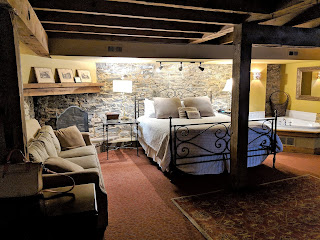 The property also features an onsite bar where couples can relax with their preferred libation before, or after dinner.


The Inn at Leola has two banquet facilities and is particularly popular with brides and grooms who come from miles around. Wedding parties often take advantage of the Forbes-rated four-star spa where they can choose from among a variety of services, from body treatments, to massage, facials, make-up and hair and nail care. The team of onsite wedding professionals includes floral designers, pastry chefs, a resident deejay, photographer and more so that all the wedding party has to do is show up. 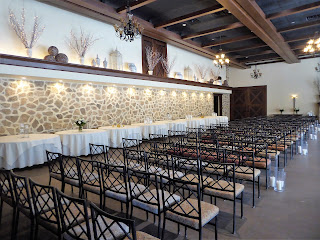 The Inn at Leola Village features an upscale Italian restaurant which has earned its share of accolades. Since opening in 2012, it has consistently maintained two prestigious awards--the AAA Five-Diamond and the Forbes Travel Guide 5 Star Award. Few restaurants in the United States lay claim to both.

TÈ,which means tea in Italian, offers diners a one-of-a-kind experience in an intimate atmosphere. Reservations aren't just recommended, they're mandatory, which is something to keep in mind, along with the fact that dinner is served on Friday and Saturday only.
Guests can choose a five-course, or a nine-course dinner, with the concept of taking a leisurely journey through Italy starting in the northernmost part and working one's way down to the warmer regions in the southern part. Customers can add to the experience by opting for wine pairings and the cheese trolley, which features more than 21 cheeses from Italy and France.
If you decide to enjoy this incredible experience, be sure to set aside a few hours. Our five-course meal stretched out for four hours, although it didn't quite feel that long since most courses were introduced with an amuse bouche. Pacing was excellent and service was attentive, with at least five employees for every couple.

Special touches included a stool strategically placed at knee-height so I wouldn't have to sling my purse over a chair, or place it on the floor and a warm finger bowl containing mint and rose petals, which enveloped the table in a lovely aroma.

We opted for the five-course prix fixe menu, which included salad, appetizer, fish and main courses.TÈ has a certified sommelier on staff and each of our courses were paired with Italian wines. Highlights of this incredible meal included yellowfin tuna with deep-fried fennel in a 15-year balsamic reduction, butter-poached halibut cheek with mint in a duck egg yolk, lamb, scallops and pork belly and the grand finale: the dessert mat, which was absolutely wonderful, from the little tortes and cakes, to the chocolate cherries the staff set aflame as we watched. 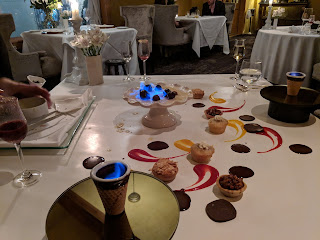 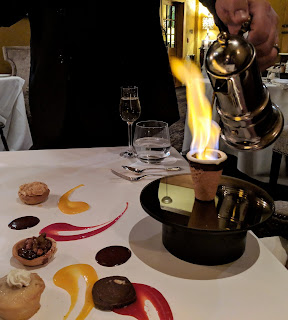 On our way out, we were helped with our coats and given a personalized menu with our names, the date and what we ate that evening to take home as a keepsake.

Part of our package included breakfast the following morning, so we headed over to the other onsite restaurant, Osteria Avanti, where I enjoyed a somewhat lighter meal of avocado toast. My husband ordered eggs and scrapple and we both laughed when the flying pig made yet another appearance.

I have to say I'm not likely to ever have such an extravagant experience again, but it certainly made Valentine's Day memorable--so that's a hint to the men out there--you have time to prepare for next year. An added plus is that if you live in Pennsylvania, you won't even need to hop on a plane.


Posted by Stephanie Kalina-Metzger at 7:24 PM