I'm always amazed at people who enjoy winter. To me, there's not much to like, from the frigid temps, to the all-too-short days, to the fact that many historic destinations close down for months. I often feel like I'm racing against the clock as fall winds down.

Just a few months ago, a friend and I made plans to visit the Hans Herr House and Rockford Plantation and it crossed my mind that they may have already closed for the season. Thankfully, they had not and we were able to arrange a quick tour of each historic property, plus visit a few other places as well.

Had they been closed, we would have had no trouble filling the time with other pursuits. Downtown Lancaster is chockablock with boutique shops, restaurants and galleries which you can count on being open just about any time of the year.


The Hans Herr House
The first stop on our itinerary was the "Hans Herr House." The 1.5 story sandstone dwelling is not only the oldest home in Lancaster, but also as the oldest Mennonite meetinghouse in America. This well-preserved abode turns 300 this year and is listed on the National Register of Historic Places.
Built in 1719, the structure is purported to have been the home of Hans Herr and his wife Elizabeth. What's known for certain is that Christian Herr, his wife Anna and their children lived there. Both Hans and Christian served as Bishops in the Mennonite church. Several generations of the Herr family would call this their home until the early 1900s when it was relegated to use as a barn and storage shed. In the 1970s, the Germanic structure was restored to its original colonial-era appearance and is now part of a museum complex, which is operated by the Lancaster Mennonite Historical Society. The complex is comprised of a gift shop, an agricultural implement shed, a blacksmith shop, a smokehouse and bake oven, a Native American longhouse and a "Faith and Furrow" exhibit, which offers information on the rural life of the Mennonites.
During our visit, a group of school children arrived and we were summoned inside and asked to take a seat on the long benches provided to hear a presentation on life in the colonial era.
The gentlemen who addressed the group shared stories with details on how children of the era dressed and lived, peppering his tales with enough humor to keep the kids interested and amused. Afterward, we gathered in the kitchen to learn more about kitchen life in the days of yore.

After leaving the house, we wandered over to the beehive oven and the smokehouse to watch demonstrations on food preservation before continuing on a self-guided tour to the various outbuildings.


The Native American Longhouse was my favorite structure on the property and is also the newest, constructed in 2013. Located a short walk from the main property across a secondary road, it is intended to give both young and old an idea of what life was like for Native Americans. The dimensions and materials used in construction reflect that which has been discovered through archaeological research done in Lancaster County, making it an accurate representation of what sort of dwelling European settlers would have encountered in the area. The Native American guide who greeted us said that he grew up on a reservation and showed us around the structure, giving us tidbits of information on how Native Americans lived. He told us he spent a few nights in the longhouse during the summer months and had encountered several curious critters. "The raccoons and skunks sniffed every inch of the place," he said. I asked him if he was concerned about the skunks and he replied, "Nah, they get a bad rap," which gave me a chuckle.
After touring the property, guests exit through the museum gift shop, which was built in 1892 and served as a farmhouse until the late 1960s. Items for sale include books, crafts and merchandise related to colonial and Native American history. This wood and coal stove, which is situated among the book for sale, dates back to 1890 and was used by a descendant of the Herr family.
The Hans Herr House and Museum is located minutes from downtown Lancaster at 1849 Hans Herr Drive, Willow Street, Pa and is open April 1 through November 30.

The Belvedere
Next on our itinerary was a stop for lunch at The Belvedere Inn located just a short drive away in downtown Lancaster. Built in 1869 by Strasburg tobacco dealer John S. Rohrer, the Victorian Italianate mansion has been operating as a restaurant in the area since 1998.
According to their website, the restaurant is so named because Rohrer built a belvedere, meaning "beautiful view," atop the mansion for guests to look down upon the city. 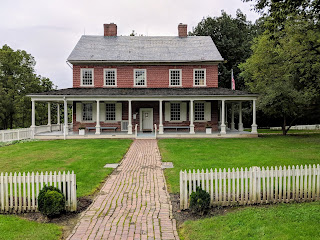 Next stop on the tour was the Rock Ford Plantation, home of General Edward Hand, his wife Katherine and their eight children. General Hand was born in Ireland and entered into medical studies at Trinity College in Dublin before enlisting in the British Military service as a surgeon's mate in 1767. He moved to Lancaster in 1774, married Katherine Ewing in 1775 and embarked upon a 25-year military career, which included serving as adjutant to George Washington. Upon returning to civilian life, he practiced medicine and served the public in various capacities.

Hand purchased the Rock Ford Plantation in two transactions: 160 acres in 1785 and 17 acres in 1792. He transformed the place into a working farm where he raised livestock and experimented in horticulture, cultivating a golden plum which still bears his name.

The Georgian-style house lacks a date stone, but it is estimated to have been built between 1791 and 1794. Speculation also has it that Edward and Katherine entertained President Washington there when he visited the area on July 4, 1791.

After the house was sold in 1810, it was owned by a series of absentee landlords and tenant farmers. During this time, few changes were made. In 1947, PPL bought the plantation to use as office space and plumbing and electricity were installed. It was later sold to the Lancaster Area Refuse Authority and was slated to be a trash incineration plant and landfill until historians, aided by the Junior League of Lancaster, stepped in and saved the historical property.  For three years, the groups embarked upon an extensive restoration project to bring the house back to its original splendor, using techniques like paint analysis and archaeological excavation. The house opened to the public in 1960.

Today, Rock Ford sits on 33 acres surrounded by Lancaster County Central Park and is operated by a non-profit foundation. It is listed on the National Register of Historic Places and is known as one of the most important examples of Georgian domestic architecture surviving in Pennsylvania and the most intact building predating 1800 in Lancaster County. More than 90 percent of the shutters, woodwork, glass and floors are intact.

Rooms are decorated according to the inventory taken of the "Goods and Chattels" of Edward Hand after his death in 1802. Those items not directly accounted for in the inventory are based on letters or other details consistent with the Hands' financial and social circumstances.

The Family Parlor
The family parlor portrays activities that were common 200 years ago, including sewing, tea drinking and embroidery. The walnut candle stand is a Hand family heirloom. Hanging above the fireplace is a portrait of Hand's middle daughter, Dorothy, painted in 1819 by Lancaster resident Jacob Eicholtz.


In the 1790s, the dining room was a rather new concept in America. The table in this picture dates to 1790 and is made of mahogany with walnut inlay. The yellow Windsor chairs were in fashion in the 1790s and reflect the Hands' familiarity with the trends of the day.

The Master Bedchamber
The Hand Estate inventory lists a dressing table, which was likely similar to the one here, situated by a window to take advantage of the natural light. The four-poster mahogany bed is hung with reproduction printed chintz, similar to that which is listed in the inventory taken upon the death of General Hand.

The Boys' Bedchamber
The three Hand boys occupied this room, which features a mahogany stained poplar high-post bed popular in the Federal period and made in Pennsylvania. A woven, homespun checked mattress bag on the bed was made by grand-daughter Katherine Hand Brien and bears her initials.

A rifle, seen in the corner, was willed to the boys from their uncle. Males were expected to become proficient in shooting both for sport and for food and many began learning how to shoot a gun at the age of 12.

The Girls' Bedchamber
Both beds pictured here are draped in a reproduction glazed printed fabric. The trundle bed was probably used for young guests and was likely slid under the larger bed during the day and brought out again at night. The "dower" chest that is positioned against the wall is similar to one that boys and girls would receive around the age of 13.

The Kitchen
The primary kitchen for the Hand household is located in the basement, but was, by no means, the only space for preparing food. A bake oven, a root cellar and a stone spring house were complements to the kitchen, but are no longer in existence.

The fireplace that you see here was re-opened in 1997 and is in working order. It is pressed into service during special events.

The whetstone for sharpening knives and the iron crane are original to the house and if you look closely, you will see a sugar "cone" on the table. During the Hand era, sugar cane was boiled down and placed in molds, left to harden and then popped out in the shape of a cone. The processing was done in the Caribbean and brought to American ports. What I found particularly interesting is that the cones were generally kept under lock and key due to their high price.

You can learn much more about the Rock Ford Plantation by taking a tour of the property led by knowledgeable docents. The house is open to the public from April through October, Tuesday through Sunday. Tours start at the top of every hour from 10 a.m. to 3 p.m.

The Lancaster Arts Hotel dates back to 1881 and once served as a warehouse where tobacco was stored. Over the years, tobacco gave way to paper, then twine and finally electronics. The hotel is comprised of 63 rooms and 1,100+ square feet of meeting space. The boutique hotel stands out among its peers with unique furnishings and artwork that you won't see at cookie-cutter hotels. Amenities include free internet access, a complimentary deluxe continental breakfast, Turkish bathrobes and nightly turn-down service.


Located within the hotel is the award-winning John J. Jeffries Restaurant, named for a tobacco inspector who signed and dated one of the beams which was discovered during renovations. The farm-to-table restaurant touts local, organic fare, free from chemicals and hormones.
Another area lodging destination that has been re-purposed from an old warehouse is the Cork Factory Hotel. Located at 480 New Holland Avenue, it is comprised of 77 rooms and was once home to the Armstrong Cork and Kerr Glass companies.

An onsite spa features a whole host of treatments, from facials to body treatments and bridal hair and makeup.

The Cork Hotel also provides guests with a convenient attractive onsite restaurant. Cork and Cap is known for its Pennsylvania Dutch comfort food prepared with a modern twist.

Both hotels are located within minutes away from the Lancaster County Convention center, Pennsylvania Dutch attractions, shopping and art galleries.

My visit to Lancaster was a short one. There's much more to do and see in the area and I hope to visit again when the weather warms to share with you even more details of the many fascinating destinations located in Pennsylvania Dutch country. If there is anything in Lancaster that I should be visiting, please let me know in the comments.

Posted by Stephanie Kalina-Metzger at 10:02 AM