Are you one of those overachievers who has already trimmed the tree, bought and wrapped the gifts, baked the cookies and is spending time scanning Pinterest for more projects to complete before Santa arrives? Me neither, so adding an out-of-town getaway to your list might be piling on. (If you're wondering why my blog posts haven't been as frequent, let's just say I blame the season for the reason.)  As an enabler, it's my job to encourage a self-indulgent getaway this time of year. After all,  if your nerves are frazzled, it might be what you need to recharge your batteries so you can return home refreshed and ready to tackle any projects that await. Things do seem to get done one way or another, don't they? Have faith and keep moving is my motto.


One special place I like to visit each year is Bethlehem,located in the Lehigh Valley of  Pennsylvania. And yes, I'll admit I've written about the regon a few times, but there's so much to do and see in the area that I always seem to find new ground to cover.


Selecting a Place for an Overnight Stay 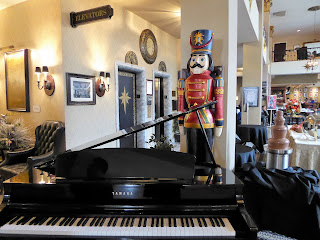 Since I first set foot in Bethlehem about a decade ago, I immediately became enamored with the historic Hotel Bethlehem, which is particularly striking this time of year, touting dozens of wreaths, Christmas trees and larger-than-life toy soldiers.  The hotel, constructed in 1922 at the direction of Bethlehem Steel President Charles M. Schwab, is located within walking distance of shops, galleries, restaurants and boutiques. Luminaries like Thomas Edison (pardon the pun) and Henry Ford were early visitors and the list of celebrities who have visited is rather long. Evidence remains in the form of pictures, which decorate the wall of the first floor Tap Room, so be sure to stroll over and have a look. 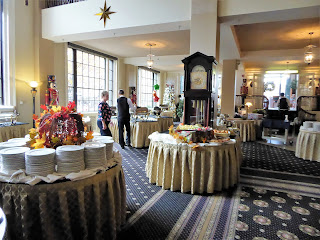 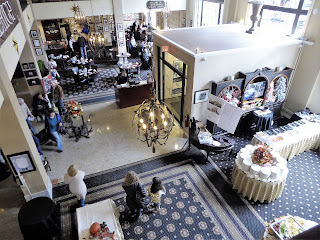 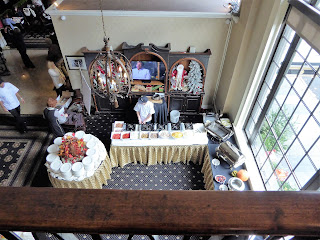 The Hotel Bethlehem is also known for its fabulous brunch, which has earned a spot in the top 100 brunches list as recognized by the OpenTable Diners' Choice Awards. Every Sunday from 10:30 a.m. to 1:00 p.m., people come from miles around to enjoy the bounteous buffet, which includes a selection of seafood, a carving station, made-to-order waffles, omelets and more.
The hotel also offers fine-dining at "1741 on the Terrace," where CIA graduate Chef Michael Adams demonstrates his culinary talents with dishes like "Osso Bucco," lobster ravioli and New Zealand salmon.
Don't leave without checking out the murals in the "Mural Ballroom." Painted by artist George Gray in 1936, the seven murals tell the stories of people and events in the area, from the founding of Bethlehem, to the birth of the iron and steel industry. Ben Franklin is pictured visiting the area to counsel the Moravians on self protection and a painting of Asa Packer recognizes the businessman's humble beginnings as a "Breaker Boy." Packer later controlled the Lehigh Valley Railroad, before founding Lehigh University.

Behind the Hotel Bethlehem is an historic area known as the Colonial Industrial Quarter where restored buildings located along the Monocacy Creek tell a tale of days of yore. Among them are a limestone tannery and waterworks (1792), known as the first municipal water-pumping system in the country. Replica buildings include a springhouse and a blacksmith shop where docents demonstrate and explain the craft. Exploring the area is free and signs along the path provide important historical details. 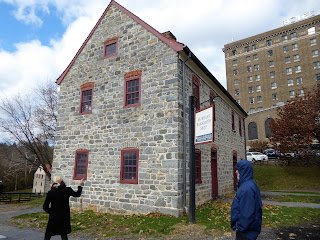 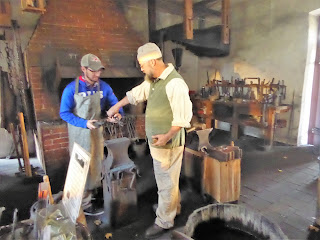 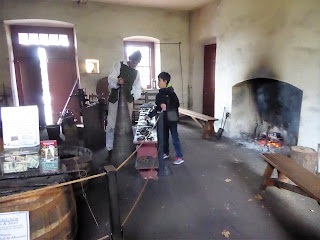 Located across the street from the Hotel Bethlehem is the oldest, continuously operating bookstore in the world. Established in 1745, the Moravian Book Shop offers a wide range of books and out-of-the-ordinary gifts to suit a variety of tastes.

For those interested in gaming and shopping, the Sands Casino Resort is an excellent choice and offers not only comfortable accommodations, but a nice variety of dining options. Seafood lovers will enjoy Emeril's Fish House, with selections like King Crab legs and striped bass, oysters, scallops, crab cakes and a mouthwatering and popular buttermilk fried chicken. 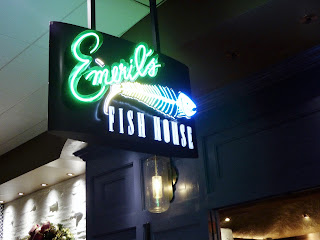 Another famous chef represented at the Sand's is the talented "Buddy" Valastro. At "Buddy V's" the cake boss offers up food inspired by Valastro family gatherings with dishes like steak pizzaiola, linguine and clams with lobster and a wide-range of desserts ranging from Cannoli to Zeppole. Take your chances on slots or table games after dinner, or consider heading next door to the Outlet at Sands Bethlehem. There you'll find a retailers like Charming Charlie's, Coach, Lenox, Dressbarn, Christopher Banks, Chicos and Talbot's, to name just a few.

Visiting the Hoover-Mason Trestle at the Steel Stacks
Not far from the Sands is the Hoover-Mason Trestle, which I visited for the first time this year. The Hoover Mason Trestle was once used as a narrow gauge railroad to transport coke, limestone and iron ore needed to make iron. The railroad carried the materials from the ore yards to the blast furnace. Today people can get up close and personal with the 46-foot tall, 2,000-foot-long trestle via public walkway. As someone who once lived near Steelton, Pennsylvania, I am quite familiar with Bethlehem Steel, which employed many individuals in the area. 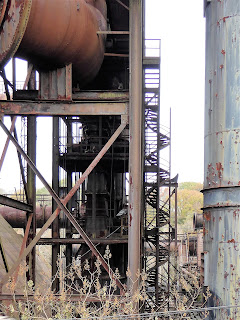 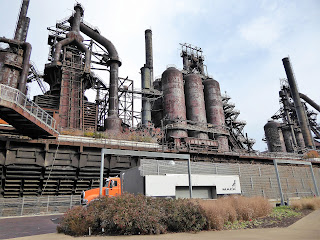 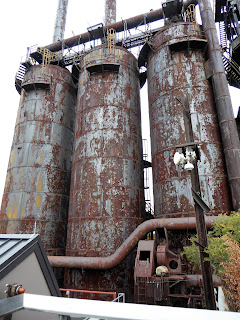 Museums Galore
Bethlehem has a rich history and, as such, there are no lack of museums. A few include the Apothecary (located behind the Moravian bookstore), the Moravian Museum of Bethlehem,  Gemeinhaus, the Sisters' House, Burnside Plantation and the Goundie House, which is especially fun this time of year. Each day from December 5 through December 23, around 5:30 p.m., a town crier calls for everyone to gather round and a child is selected from the crowd to open the door of the house located at 501 Main Street. What's behind the door usually creates a bit of a buzz until the surprise is revealed, be it  carolers, bagpipers or quartets who emerge from the house to entertain the crowd and afterwards distribute treats to the wide-eyed children.

For the first time this year, I visited the only museum in Pennsylvania to be dedicated to the decorative arts. The Kemerer Museum of Decorative Arts is housed in three, interconnected, mid-1800's homes and features period rooms and galleries containing furnishings that reflect changes in style over the past three centuries. This time of year the museum is decorated for the season. 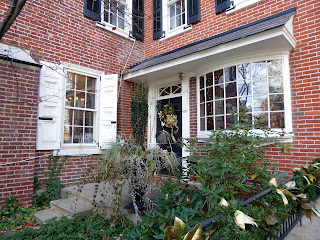 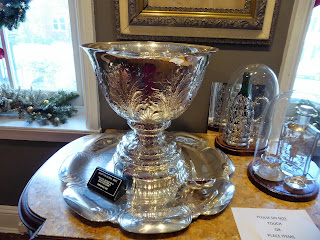 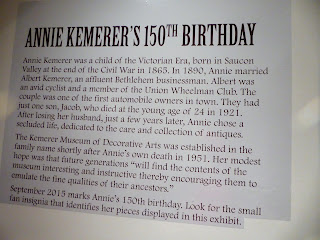 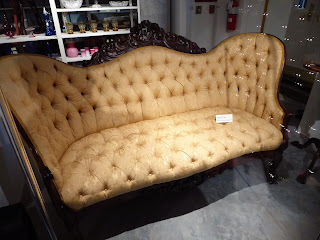 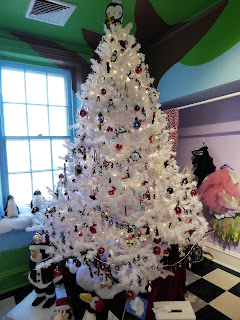 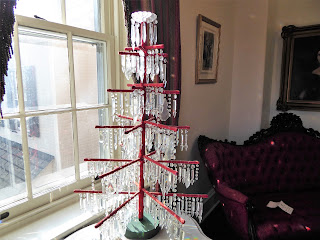 Celebrating American Excellence at the National Museum of Industrial History
A newcomer to the Bethlehem scene is the National Museum of Industrial History (NMIH), which opened its doors in August of 2016. Housed in a 100-year-old former Bethlehem Steel Facility, the NMIH features approximately 100 machines borrowed from the Smithsonian's 1876 collection. The mission?  To tell the story of America's industrial achievements through the accomplishments of our workers, innovators and entrepreneurs.
Bobbin boys and girls worked nine hours a day in the silk mills in the early 20th century. 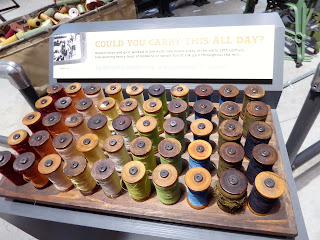 Further Off the Beaten Path
If you have some extra time and would like to explore the surrounding area, consider a stop at Vynecrest Vineyards & Winery. The family-owned business is known as the oldest vineyard in Lehigh County and makes approximately 22,000 gallons of wine per year. Today they offer a total of 20 varieties.

The Glasbern Inn located in Folgelsville, Pennsylvania offers overnight accommodations and a romantic restaurant that is open to the public seven days a week. People come from miles around to dine in the highly regarded restaurant housed in a 19th-century barn that features soaring ceilings, a cozy fireplace and field stone walls. The owners make it their mission to stay as local as possible in procuring their ingredients, many of which are grown on site. 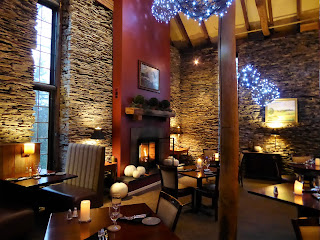 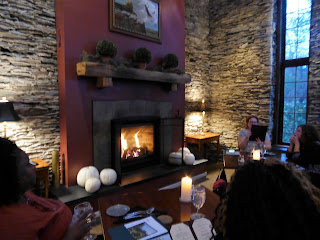 After reading about all there is to do, you might understand why I find the Bethlehem area so enchanting during Christmastime and if you're lucky, you might encounter a few carolers strolling the streets in period dress.

If you can't find time in your schedule to visit during the Christmas season, there are still plenty of things to do throughout the rest of the year and with a little planning, perhaps you'll have the time to return for next year's Christmas season.

Posted by Stephanie Kalina-Metzger at 8:22 AM