For a small community of fewer than 1,000 inhabitants, Berkeley Springs offers plenty to do and see for the tourist seeking a change of scenery. It's  been about six weeks since I accepted the invitation to be a judge at the annual Berkeley Springs International Water Tasting event and I'm finally finding time to write about my visit to the area. (Those who have yet to read about this unique experience can view the details in an earlier post on this site.)

I needn't have fretted about frigid February weather. In an unexpected twist, temperatures climbed into the mid-70, and to think, just last year, the region was encased in ice just around that very same time.

Known for its Waters 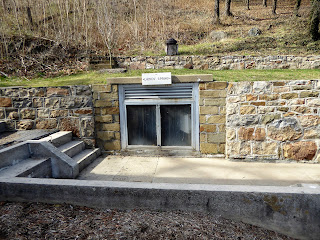 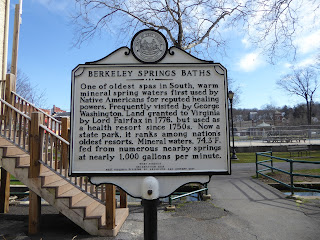 Berkeley Springs was once home to native Americans who first used the warm mineral springs for healing purposes before white settlers arrived. In 1776, George Washington, who was known to frequent the area, joined his friends and formed the town of Bath, now known to the world by its postal name "Berkeley Springs." Visitors have since been drawn to the waters which were said to have curative properties and were prescribed for a variety of ailments ranging from rheumatism to digestive disorders. Whether they do or not is up for debate, but the most prominent mineral is reported to be magnesium carbonate. Historians report that "taking the waters" often provided an excuse for socializing as well.

Early bathers were known to have soaked in hollowed-out pools, with privacy provided by woven brush screens. Women and men would bathe on alternate days. I must admit I was just a little disappointed to learn that "George Washington's Bath Tub," which can be seen near the west side of Berkeley Springs State Park, is merely a representation of bathing conditions at the time.

During warmer weather, children and adults alike wade in the park's pools and channels. The Bathhouse is open all year round where visitors can, for a fee, luxuriate in jacuzzis, or in a walk-in "Roman Bath" filled with 750 gallons of mineral water, which is heated to a temperature of 102 degrees. 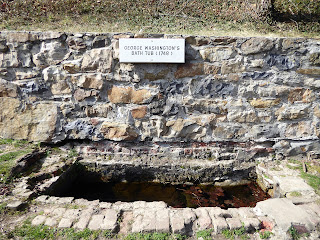 Guests also visit the park to help themselves to free water from public fountains housed onsite under the historic Gentleman's Spring House located next to the Old Roman Bathhouse. When we visited, we spoke with a couple who were filling up dozens of gallon jugs they had toted from Washington, DC.
Staying in the Heart of the Action
The Country Inn is located in the center of town within convenient walking distance of Berkeley Springs Park and other retail and service establishments. Both rooms and suites are available and restaurants are located on site. 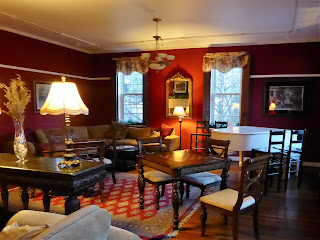 House upon the Hill, Moon is Lying Still
When entering the grounds of the Berkeley Springs State Park, your eye will be drawn upwards to a castle perched atop a steep cliff above the park. The odd structure seems a bit out of place and I couldn't help but be reminded of this old song sung by the inimitable Lizard King.

The medieval-looking castle, with it's carved cross located in the center of a turret, was nothing short of intriguing and I questioned our guide, Jeanne Mozier, about it. She provided me with a few details and only later did I discover that she wrote an entire book about the place, so I made it a point to purchase it at a local gift shop.

In her book titled, "The Story of Berkeley Castle: What's True and What's Not," Mozier describes the structure as being built in 1885 at the directive of businessman Samual Taylor Suit. Constructed from sandstone, the castle includes 15 interior rooms and a basement "dungeon." Work was completed by 1887 and soon afterward Samuel, his third wife Rosa and their three children moved into the abode.

Taylor Suit, as he preferred to be called, possessed not only a peculiar name but also an intriguing story--details of which unfold in Mozier's book. The "railroad man/distiller" ended up marrying a total of three times during his life. His first marriage, to his bosses' daughter, ended tragically when his wife died while giving birth to a son, who also passed.

Suit eventually ended up in Manhattan where he (once again) married the daughter of a business connection. This paved his way to a seat on the New York Stock Exchange.

The couple conceived two children, of which only one survived and marriage number two sadly ended in divorce.

By 1883, Suit was ready to marry again, perhaps feeling as if the third time would be a charm. The 51-year-old businessman likely raised a few eyebrows by marrying a woman who was 30 years his junior. Rosa, too, had "connections." Her father served one term in the U.S. Congress, worked at the U.S. Treasury and also practiced law.

By 1888 however, Suit's business connections were all for naught. He succumbed to illness, leaving the 27-year-old widow with, well, pretty much everything, on the caveat that she would never remarry.

According to Mozier, "After a brief period of mourning, Rosa launched what would be a decade of glittering parties" and although she never did remarry, rumor had it that she took on a lover. The noted horseman was also heir to "Ravenswood," another "cottage" estate nearby.

The local press reported breathlessly on the young widow's extravagant parties, from the decor of the mansion to the elite invitees, to the activities therein: "There was dancing to a coronet band and then a march to the supper room at 11:30 p.m. for a bountiful repast," reads one article.

The socialite seemed to revel in her role as "talk of the town." An interesting tidbit in the book mentions a smoking habit, which was considered a scandalous practice among women of the era. "The Hotel Dunn would order her gold-tipped Malachrino cigarettes, made especially for the ladies," reports Mozier.

Rosa's over-the-top lifestyle finally caught up with her and the creditors came a calling, prompting her to change her last name to Soult at one point. She was eventually booted from the castle, after a brief period of what appears, (from information provided in the book), to be squatting, although I doubt they used that term back in the day.

Over the years, aspiring entrepreneurs attempted to run the castle as a business venture. It was used as an artists' residence, a boys' camp and a tea room. Weddings were catered there as well.

Eventually, a man by the name of Walter Bird purchased the residence and gave it a little stability, conducting daily tours for a period of 50 years. The residence was later sold at auction and bought by investors in 2000. That relationship turned out to be short-lived and it was sold again in 2002 to an out-of-towner named Andrew Gosline who got caught up in the bidding on his birthday.

It has remained uninhabited since Gosline passed away in 2014 and has been closed to the public since. 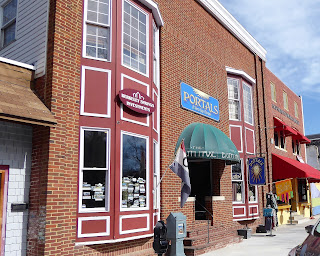 Berkeley Springs is a compact little town, making it very walkable with a variety of shops and restaurants all within close proximity. A small museum situated at the far end of Berkeley Springs state park describes the area's history in a series of panels and is home to a 400-pound sandstone that was pulled from Warm Springs Ridge.

Guests will find plenty of places to browse among the many shops that line the streets. For antique lovers, the Berkeley Springs Antique Mall on Fairfax street features a large variety of items sold by dozens of dealers. Glassware, ephemera, estate jewelry, furniture and more can be found here.
Guests can even poke around the public library located downtown or take in a show at a historic old theater by the name of "The Star." Dining opportunities offer a little something for all tastes and budgets. During my visit, I enjoyed a stellar brunch prepared by Chef Devin Lucas at Tari's Cafe.


Those looking for a quiet, laid back, inexpensive vacation will find plenty to do and see during a weekend in Berkeley Springs. My only regret is that I didn't visit this picturesque little area during the summer when everything was green and in bloom, but with temperatures soaring into the '70s in late February, who am I to complain?
Posted by Stephanie Kalina-Metzger at 9:25 PM