A Quick Philly Jaunt to a Few Philly Haunts 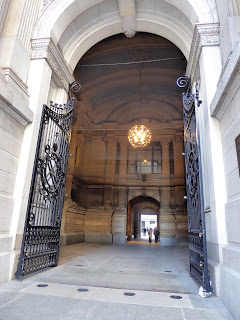 I found myself in Philadelphia last weekend on what could hardly be described as a "trip." I suppose it was more like a jaunt--an overnight stay, which began on a chilly Saturday afternoon. I found it hard to believe that just one week earlier, I was enjoying strolling around Berkeley Springs, West Virginia in short sleeves prior to taking part in the annual International Water Tasting Competition, (which I will be writing about later). The weather was glorious as temperatures soared into the 70s. Just seven days later in not-too-far-away Philly, we were braving mid-20 temps, quickening our steps and pulling our coat collars up against the wind as we made our way to various destinations downtown. 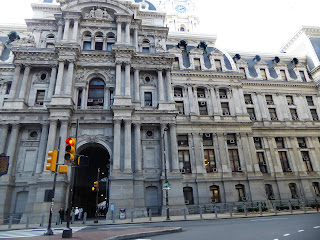 Despite our last-minute decision to spend a night in the bustling area, we managed to nab a decent rate at a nicely appointed and spacious room at the Marriott Residence Inn Center City, with Billy Penn staring right down into our bedroom window.

Guests were offered a free, hot, breakfast featuring the standard selection of fruit, yogurt, sausage, scrambled eggs and my husband's favorite--biscuits and gravy. I'd recommend the property to anyone who wants better-than-average accommodations located in the heart of the action.

If you're comparing prices, however, do factor in a $53 valet charge, or you'll get sticker shock like we did. The City of Philadelphia (heretofore unbeknownst to us) implemented a $10 per-car valet tax and because there was no onsite lot, we had no choice but to use the service. It seems like standard parking in large cities ends up costing $30-$50 no matter which way you slice it these days. Two years ago we stayed in a Washington, D.C. Marriott Marquis and paid $50 there as well.
Normally when I embark on such a short trip, I don't usually take the time to write up an account, but I did manage to take a few nice pictures of the area and wanted to share the shots taken from one destination, in particular. 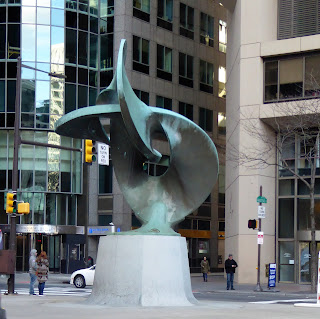 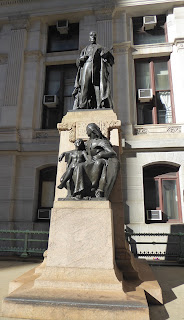 The pictures below happen to be the ones I shot with my plain old Lumix digital from the One Liberty Observation Deck located at One Liberty Place. The attraction is relatively new, having opened just over a year ago on November 28, 2015.

Open 365 days a year from 10 a.m. to 10 p.m., the deck is accessible via a 75-second elevator trip to the top of the 57th floor for a panoramic view of the city. (Afterwards, you can spend some time at the upscale shopping mall located at the same address.)

Below are a few of the stunning views I captured from various lookout points. 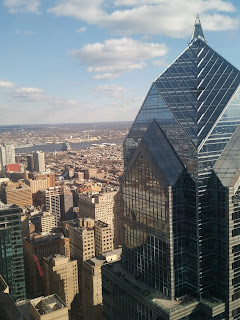 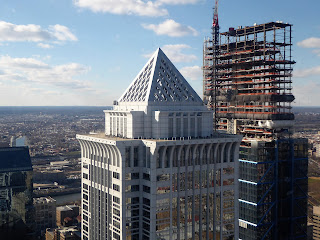 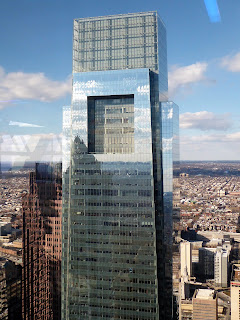 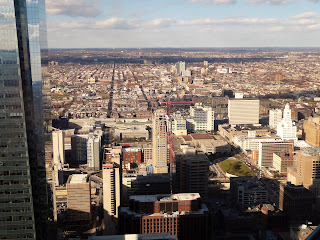 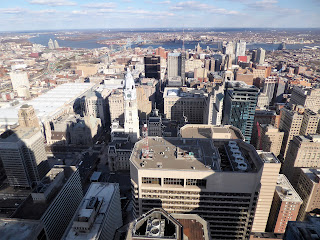 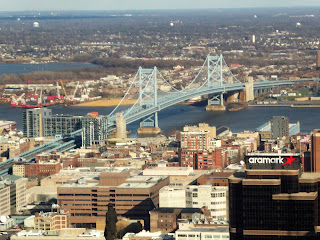 Later that evening we enjoyed small plates at a Greek restaurant called Opa located at 1311 Samson Street. The Greek salad, pork souvlaki and keftedes were wonderful, but I flipped for a delicious combination of fingerling potatoes with taleggio cheese and pancetta. It wouldn't be a proper night in Philly however if didn't come home with a story, or two. As we sat near a street-level window overlooking Samson Street, we watched a transaction that involved money, a large bowl pipe, a "hit" and a grin. Kinda like "loosies," but with weed. Inflation and all, I suppose.

After dinner, I had the ill-advised idea to venture down the alley to the "oldest continuously operating tavern in Philadelphia," called McGillin's Old Ale House. I guess we didn't fit in well with the under-25'ers because we raised a few eyes and a nervous looking crowd parted as we made our way inside. Were they expecting a bust? I swear I heard, "Oh shit."

Others just gaped at us as they slid to the floor. I couldn't help but be a bit amused, but I wasn't hanging around either. Well, W.C. Fields did famously say, "Philly is a wonderful place; I spent a week there one night."

Later, I learned a few more interesting details about the place, like it opened the year Lincoln was elected and the taps have been flowing since 1860. Ma and Pa McGill raised 13 children there and back in the day, Ma had a list of "ne'er do wells" whom she refused to allow past the front door. According to their website, the list read like the social registry and included some of Philly's most prominent citizens.

I also learned that McGillin's is home to a rather intriguing collection of signs from now-defunct Philly businesses like Wanamakers, Woolworths, Lit Brothers, Strawbridge & Clothier and a stately old respected institution by the name of Deux Cheminees, where we had the pleasure to dine over a decade ago. (The 100+-year-old twin brownstones with leaded stained glass, walnut paneling, and Mercer-tiled fireplaces closed in 2007 and have since been taken over by the highly acclaimed vegetarian restaurant known simply as "Vedge.")  I doubt we'll go there due to...well, take a guess. (Hint: He's in the picture below.)
We stopped for a late-night drink before returning to the Residence Inn and I ran into an old professor who was fired up on scotch and politics, but that's another story to file away with the many other quirky memories we've collected on our many visits to the City of Brotherly Love.

Posted by Stephanie Kalina-Metzger at 5:50 PM

Email ThisBlogThis!Share to TwitterShare to FacebookShare to Pinterest
Labels: Philadelphia