Tucked away in a nondescript warehouse in Montgomery County not far from the Valley Forge National Historical Park is an extensive collection of Americana that has been delighting visitors since opening in 2010.

The unique assemblage of antiques, kitsch and pop art housed in an old B.F. Goodrich tire plant, spans 100,000 square feet and is owned by a mysterious man who eschews the limelight. "He prefers to remain anonymous to allow the collection to take the spotlight," said Treasure Tour Director Virginia Frey.
Although the collection itself is whimsical, viewing it on a whim is not. Groups are favored, so a bit of pre-planning may be required in order to take the 90-minute tour. With that in mind, I suggest reaching out to others who may be similarly intrigued, like social meetup groups, for instance.
Music Collection Strikes a High Note with Visitors
Guides greet guests at the front door of the warehouse and lead them up a set of stairs to an expansive room containing one of the largest collections of mechanical music machines in the world. 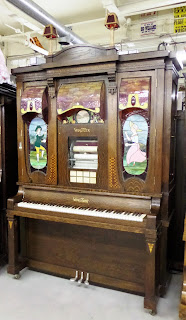 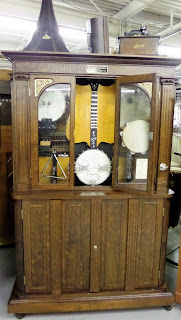 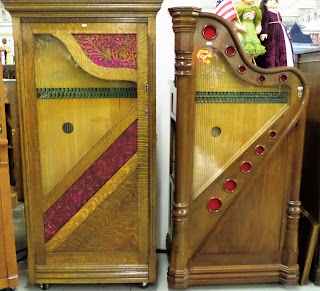 Nickelodeons, calliopes, PianOrchestras, player pianos, dancehall organs and massive band hall organs all spring to life via a modern-day iPad operated by a tour guide. Colorful lights blinking in time with the music may conjure up an image of great-grandparents enjoying themselves at an amusement park or dance hall so many years ago.
Many guests express amazement at the pristine condition of the machines. The oldest of them, deemed the "Mills Violano-Virtuoso Double Violin," dates back to 1897 and is a beautiful piece of equipment. Those rich enough to part with five cents back then could observe the two violins playing a tune, with the assistance of small, electric-powered rollers manipulating the strings. The impressive invention struck quite a chord in the music world and was named one of the "Eight Great Inventions of the Decade," by the United States Patent Office. It was was just one of the curiosities displayed at the World's Fair in Seattle in 1909.
A two-tiered arranger's piano like the one below is on display and was owned by J. Lawrence Cook, one of the most prolific piano roll artists in history. The instrument was used to compose approximately 20,000 recordings.
A hulking piece of equipment will undoubtedly intrigue movie buffs. Guests can sit at the 2,500-pound machine and manipulate the piano-like pedals to produce up to 35 sounds like horns, bird tweets, train whistles and more. Only 100 of the rarities still survive and a dozen of them are owned by the mysterious collector.

A music collection would be incomplete without a selection of music boxes. Before being whisked off on a tram to the second half of the tour, guests are permitted to inspect a collection on loan from the
International Music Box Society. The machines, which play through the use of punched paper, punched disks and pinned cylinders, predate electrically amplified music and the selection comes from various parts of the world.The one directly below hails from Bavaria. 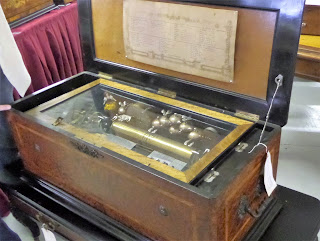 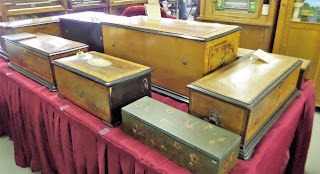 Riding the Tram
During the second half of the tour, guests are whisked hither and yon through the warehouse, hardly knowing where to look first--up, down, side to side? Blink and you'll miss something. Car aficionados will enjoy the diverse selection of automobiles, ranging from the 1905 Franklin, to the 1905 Curved-Dash Oldsmobile, a 1914 Woods Mobilette, a 1914 Liberty Brush with wooden axles and a 1922 Stanley Steamer. And guests can only guess where the collector acquired the 1934 Buick, complete with bullet hole and suicide doors.A 1908 Sears Motorbuggy is interesting in that it was ordered via the famous "Sears Catalog" for $395 and arrived at customers' homes unassembled. A 1929 "Whippet" on display is a precursor to the modern-day Jeep and a 1909 ABC is one of only three known to exist. Early ads I discovered described the car as a "fine hill climber with speeds up to 35 miles per hour. Air or water cooled, with solid, or pneumatic tires." I also found this interesting video on how the Stanley Steemer operates at this link. 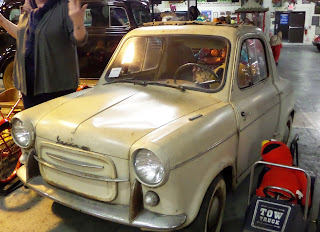 The tram continues with a journey through the "toy box," revealing a jaw-dropping selection of old store "animatons," which come to life as the tram rolls down the aisles. A life-sized Steiff elephant waves its ears and clowns entertain the crowd around with jumps, flips and rolls. Carnival memorabilia, including calliopes and carousels activated by the guide, add to the festive atmosphere on this half of the tour. 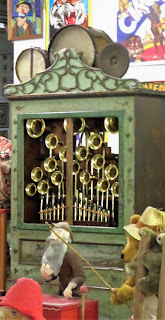 It's hard to believe that only half of the collection is on display. The other half is currently in storage, according to Frey. "We are always adding new things to the collection so that people feel like it's a different tour each time they visit," she said.
Modern-day pieces also made their way into the collection. Whether it's a fiberglass cow by the name of Cowlamity Jane, a 20-foot-tall high-heeled pump from a since-cancelled cable show called "Wedding Central," a five-foot tall head of https://www.youtube.com/watch?v=ws-Kp2aLcEcAlbert Einstein, or a miniature tableau of pop icons made with found objects--one thing's for sure--it all seems to fit within the wacky and whimsical world within the warehouse.

Posted by Stephanie Kalina-Metzger at 6:20 PM