Mister Rogers’ Trail Celebrates a Man and His Message

Fred Rogers may no longer be with us, but his memory lives on in the hearts of many. With the release of the “Won’t You Be My Neighbor,” documentary, Rogers’ popularity has grown to include a new generation of fans.

Fred Rogers' imagination was honed at a young age.  “I had every imaginable childhood disease, even scarlet fever. I had to make up a lot of my own fun,” said the iconic personality known best as the creator and star of "Mister Rogers Neighborhood," a PBS television series that ran from 1968-2001.

When television arrived on the scene, Rogers found himself watching with wide-eyed amazement on how the medium was being used. “I was all set to go to the seminary,” he said, as he observed people being hit in the face with pies. “This could be a wonderful tool; why is it being used this way?” he asked himself.

And the rest is history.

Fans of Fred Rogers no longer have to be content to simply watch re-runs of his shows online. Today they can go on a journey to 12 destinations that celebrate the man and his mission.
Highlighted below are a few of those stops along the Fred Rogers Trail, which included his hometown of Latrobe, nearby Ligonier and finally Pittsburgh, Pennsylvania.

Idlewild & SoakZone has been recognized by Amusement Today as “The Best Children’s Park in the World,” which is reason enough to schedule a visit. The fact that the original Mister Rogers Neighborhood of Make-Believe operated in the park from 1989-2013 is just icing on the cake for Mister Rogers’ fans. When the attraction closed in 2013, it was replaced by the Daniel Tiger’s Neighborhood Ride, which uses the same trolley, tracks and several of the sets from the original show.


The Fred Rogers' Center is an interactive exhibit, which is open Monday through Friday and features a selection of Mister Rogers’ sweaters, all of which were knitted by his mother. Additional artifacts include puppets from the show, Rogers’ iconic sneakers, the Neighborhood Trolley and more. A series of panels follows his life from a small-town boy to a nationally known media personality.

Fans of Mister Rogers may recognize the McFeely name. Fred was raised by James H. and Nancy McFeely Rogers and graduated in 1946 from Latrobe High School, where he served as yearbook editor and president of the student council. A collection of memorabilia celebrating Mister Rogers school years is open to the public during scheduled school activities.

Fred Rogers Statue in James H. Rogers Park
200 Main Street, Latrobe
The James H. Rogers Park, named in memory of Fred’s father, is located at the corner of Jefferson and Main streets in downtown Latrobe. There Mister Rogers awaits on a nearby bench to welcome visitors to sit and maybe even snap a selfie. The artist who worked on the statue was said to be so precise that he asked for the size of Mister Rogers’ clothes to create the most accurate likeness of the television star. 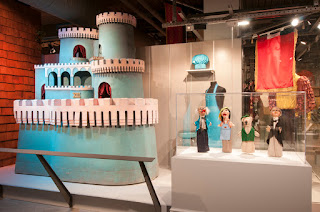 Brady M. Smith, Director of Marketing and Communications at the Senator John Heinz History Center, said that the Mister Rogers’ Neighborhood exhibit draws visitors of all ages, attracting not only children, but parents and grandparents as well. “It is arguably the most popular display at our six-floor, 375,000 square foot museum,” said Smith. “When visitors walk in and see X the Owl’s Tree or King Friday XIII’s castle for the first time, they just light up with a sense of nostalgia that overwhelms them,” he added.
Smith said that Daniel Tiger’s Neighborhood on PBS has also spawned a renewed interest in Fred Rogers. “Many of the set pieces are featured in the cartoon, so it’s wonderful to see Fred Rogers’ legacy reaching new generations of fans,” he said.
These are but a few of the highlights along the Mister Rogers Trail. His timeless appeal lives on due to his simple message of love, which Rogers described as ‘the root of everything.’
Paul Siefken, President and CEO of Fred Rogers Productions, offers his take on why Fred Rogers’ appeals spans generations. “In Mister Rogers Neighborhood, everyone is welcome and valued. Embracing new experiences, respecting yourself as well as others, fostering curiosity about the world—these are timeless messages that will always be relevant for both children and adults,” he said.

To learn about all 12 stops along the trail and noteworthy detours, check out the Fred Rogers Trail page at VisitPA.com/fredrogers.
Posted by Stephanie Kalina-Metzger at 3:40 PM