A few weeks ago, I decided to carve out a few days to poke around Charlottesville, Virginia, located along the foothills of the Blue Mountains. What I discovered was an array of activities and attractions to appeal to a wide range of interests.

Because I had but three days to explore, I was forced to use my time wisely, so I made it a point to hit the hot spots. What I walked away with was a new appreciation for the area and its rich history.

Staying in the Heart of the Action
If convenience is high on your list of priorities, you can't go wrong by booking a stay in the historic district at the Omni Hotel in Charlottesville, located just 20 minutes away from the Charlottesville airport and steps away from The Downtown Mall.

The 205-room hotel has been named the "Number 1 Hotel in Charlottesville," by the Daily Progress and features a seven-story glass atrium, two pools (indoor and outdoor), a fitness center, coffee shop and an onsite restaurant (The Pointe), which I highly recommend. I'll allow the picture below to speak for itself.
Not to put you to sleep, but one thing that impressed me the most was the bed, which had me at zzzz. I couldn't get over how comfortable it was. Usually, I sleep like a baby, meaning that I toss, turn and whine. Not here. I felt cradled in comfort and was out like a light in short order. I'll probably be comparing that bed to all others for a very long time.
A Shopper's Paradise
It's not often anymore that you can walk out the front door of your room and find yourself in the middle of an outdoor mall, but that's what you'll find just a few steps from the front door of the Omni. The Downtown Mall is a shopper's paradise, with independent shops for blocks. Should you grow tired of spending all that money and need to take a rest, there are plenty of eateries along the way offering dining, either indoors, or al fresco. To me, that's just icing on the cake. 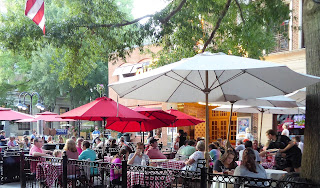 One shop that caught my eye was Timberlake's pharmacy and when I saw it was established in 1890, I just had to wander inside to check it out.

Timberlake's offers solutions for what ails you and more and what woman can resist a stop at a drug store while on vacation? Maybe I'm just weird like that, but there always seems to be something interesting to be found in an out-of-town drugstore. In this case, their selection of merchandise ran the gamut, from pies, to barrettes, shampoo, aspirin and canes. A rather extensive selection of perfume will have you harkening back on quasi-feminist ditties like this one hawking a scent called Enjoli, which, believe it or not, is still around: "She could bring home the bacon, fry it up in a pan, and never, ever, let you forget you're a man...." 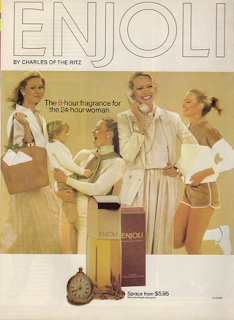 Venture further back and you'll see a quaint space that will transport you to an era when soda fountains were prevalent inside pharmacies due to the common practice of mixing soda water with medicine. The one at Timberlake's has withstood the test of time and still draws its fair share of "regulars," who socialize while sipping on made-to-order drinks like egg creams and milkshakes. Proudly displayed on the wall are old newspaper articles that have been penned about the place over the years. In one article, the writer casually mentions customers ordering ammonia cokes up until the 1980s. Later research revealed "spirits of ammonia" was actually added to the coke and the drink was said to alleviate the side effects of a night on the town. Could it be the gentleman in the story knew where to go to nurse a hangover? I guess we'll never know. I do, know, however, that the place holds a soft spot in the heart of many as one of the oldest businesses in Charlottesville.

The Downtown Mall is also home to Charlottesville's Paramount Theater, created by Rapp & Rapp, the architects who were responsible for the Paramount-Publix theater chain. According to reports, the theater became a landmark almost immediately upon opening on Thanksgiving evening in 1931.  In its heyday, audiences who flocked to the venue week after week numbered in the thousands, but with the advent of television, theaters began to lose their attraction. The Paramount managed to maintain a downtown presence until 1974, when it was forced to shut down. Years later it re-opened, thanks to the grit and determination of those who loved the old mainstay. In 1992, the non-profit Paramount Theater, Inc., purchased the building and worked with a grant from the city on an extensive restoration project costing upwards of $16 million. Today it serves the community as a performing arts center.

Before we left the downtown area, we decided to dine at a modern-day speakeasy called The Alley Light, which we had trouble finding. After walking up and down the street several times, we enlisted the help of a friendly local, who steered us in the right direction. (Hint: It was through a gate, off the street and appeared to be a private back entrance to a business.)


While we were there we enjoyed a few small plates and creative libations like "Brunch at Becky's" made with Tanqueray, lime, Dolin Blanc and Green Chartreuse. We even spotted a bride and groom from our perch near a window overlooking the street.

The Downtown Mall is a special destination that should be part of any trip to Charlottesville. So what did it take to create the popular area that draws locals and out-of-towners alike? Click on this link to learn about the evolution of the mall and the personalities and pioneers who joined together to make it what it is today. 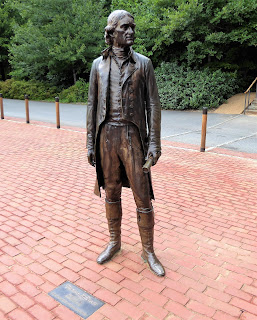 Charlottesville is also the location of Monticello, the home of Thomas Jefferson, who is best known as the author of the Declaration of Independence. Jefferson spent decades in politics, serving as governor of Virginia,  minister to France, the first U.S. Secretary of State, the second Vice President, the third President of the United States and the founder of the University of Virginia.

Today Monticello exists as an educational destination operated by the non-profit "Thomas Jefferson Foundation," which acquired the property in 1923.  Approximately 440,000 visitors stroll the grounds each year, generating an estimated $47 million for the local economy.

Guests have the opportunity to choose from docent-led and self-guided tours of the interior and exterior of the property. Tours of the first floor of the 43-room mansion are conducted year round. Behind-the-scene tours are offered less frequently and offer guests a peek at the second and third floors, along with the dome room. Interior photography is prohibited, so I am providing this link for those who are interested in viewing gallery pictures of various rooms inside the mansion.

A tour of the garden and grounds gives guests a glimpse of Jefferson's enthusiasm for gardening, botany and agriculture. Visitors will see a colorful array of flowers and plants from around the world and learn that Jefferson grew approximately 300 varieties of vegetables and 170 varieties of fruits ranging from apples, to peaches and grapes, to name just a few. 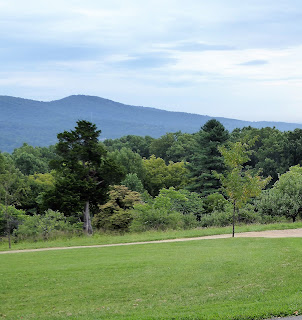 Also offered year round are 45-minute "Slavery at Monticello" tours, where visitors will learn more about the individuals who worked on the property at the time. An additional tour spanning almost two hours provides guests with in-depth information on the Hemings Family and includes information on Sally Hemings, her relationship to Thomas Jefferson and the struggles endured by slaves of the era. To learn more about "The Paradox of Liberty, Enslaved Families of Monticello," click on this link.

Thomas Jefferson was also known as an oenophile. While serving in Paris as minister to France, he gleaned quite a bit of knowledge about wine. This later enabled him to act in an advisory capacity to Washington, Madison and Monroe. His cellar contained an impressive selection of wines from Portugal, Spain, Hungary, Germany and Italy. It is said he preferred bottles over casks to ensure the integrity of the wine during the shipping process. It appeared that he was a bit cynical when it came to crewmen, wine merchants and adulteration. (That is, as they say, a whole 'nother story). Thomas Jefferson was known to have said this about his beloved beverage. "My measure is a perfectly sober three or four glasses at dinner and not a drop at  any other time, but as to those three or four glasses,'Je Suis bien friand,'" which, translated, means, "I am very fond."

Before leaving the property, be sure to take the path to Jefferson's Grave and the graveyard owned by Thomas Jefferson's descendants. 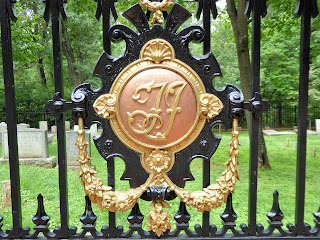 As a result of Jefferson's meticulous record keeping, Monticello is known as one of the best-documented, preserved and studied plantations in North America.  To learn more about this designated World Heritage Site, or to schedule a tour, visit the website at monticello.org. 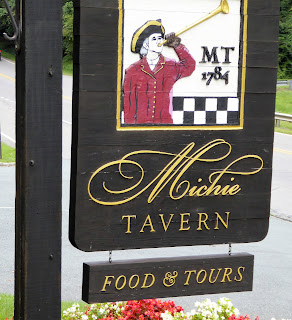 Next to Monticello is the historic Michie Tavern, which was established in 1784 by Scotsman William Michie and served as the social center of the community until the mid-1800s when it became a private home and was sold out of the Michie family at an estate auction. In 1927, the abode was purchased by an entrepreneur by the name of Mrs. Mark Henderson. Henderson worked as a partner in her husband's shirt-manufacturing business and decided to move the structure to a more accessible and popular area. The home was dismantled, numbered and moved 17 miles by horse, wagon and truck and today it still draws visitors as a museum that tells a tale of 18-century tavern life. 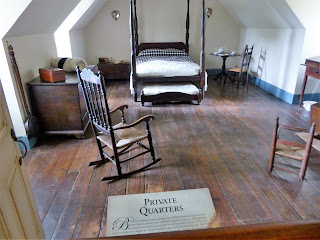 In the 1970s, The Michie Tavern Corporation added additional old outbuildings and today the complex is known as the largest collection of reassembled outbuildings in the country.
"The Ordinary," situated next to the Tavern, serves a buffet lunch year round and is quite popular as you can see by the long line, which is often the case, according to our tour guide. "They serve some delicious fried chicken," she said. The Michie Tavern's Bill of Fare for that particular day was southern fried chicken, cornbread, black-eyed peas, stewed tomatoes, cole slaw, beets, green beans with country ham and peach cobbler. 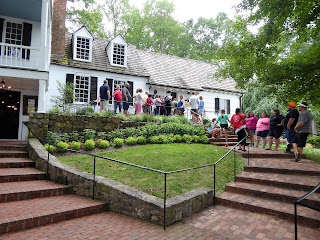 After lunch, many guests take the opportunity to visit the four unique themed shops housed in old, restored cabins. 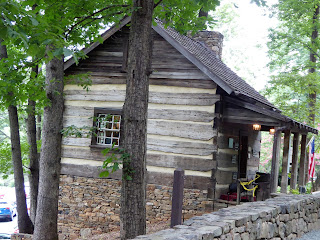 Posted by Stephanie Kalina-Metzger at 9:43 AM