A Day in Cape May


Cape May has the distinction of being one of the oldest seashore resorts in the country. The scenic area with the laid-back vibe is a perfect place to spend a few days.

Due to my schedule, staying overnight wasn't quite feasible this summer, so I had to be content to make the most of just a few hours. One-day trips to Cape May are common in the area where I live and I soon found a Lowees tour at a price that trumped their major competitor, so my friend and I booked a trip and fortunately the weather cooperated. On a sunny, early morning in mid-June we groggily boarded the bus and by lunchtime we were at our destination.

We may have been limited to a period of about eight hours, but we managed to squeeze in a lot during that time. We rode a trolly, learning tidbits about the area along the way, strolled around the town to admire Cape May's charming architecture, shopped and dined downtown, explored the Emlen Physick Estate, stuck our toes in the sand and poked our heads into a few places where we probably didn't belong.

First Stop - Downtown
The bus dropped us off at the Cape May Welcome Center located just a few blocks away from the Washington Street Mall. The sprawling outdoor center, which opened to the public in 1971, spans several blocks and features dozens of independent boutique shops offering everything from saltwater taffy, to art, accessories and apparel and is a popular meeting place that is open year round.


Restaurants are plentiful in Cape May, with about a dozen in the Washington Mall alone, from pizza shops, to casual eateries. Those seeking an elegant white-tablecloth experience may enjoy Tisha's Fine Dining, which ranks high on TripAdvisor for stellar service and dishes like Filet au Poivre, Thai Salmon and Seafood Risotto. We decided to take a more casual approach to lunch by dining al fresco at the Ugly Mug, where I thoroughly enjoyed a half pound of rock crab served with a tangy mustard sauce and a side of meaty chili. My friend gave her tuna salad bowl a thumbs up, as well.
After lunch, we decided to do a bit of shopping and I spotted several reasonably priced pieces at the Cape May Art Gallery.  I had to pass them by since I'm running out of wall space, but my friend ended up with a winter pastoral scene. Manager Karen Bianco was kind enough to hold her painting until we were ready to board the bus. I especially liked these two below. 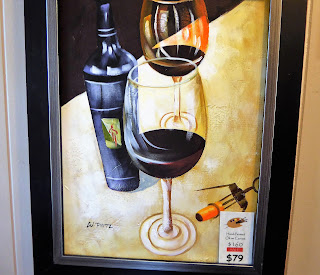 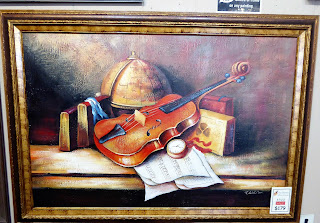 No trip to the shore is complete without salt water taffy and you can purchase some at the candy shop located at 324 Washington Street Mall. Fralinger's salt water taffy, which dates back to 1885, is the legacy of an entrepreneur whose creative ingenuity sparked a successful business and a tradition that continues to this day. When glass blower and fish merchant Joseph Fralinger decided to leave Philadelphia to return to his native town of Atlantic City, he had a goal in mind. He would take a job as a bricklayer to earn enough money to start a concession stand on the boardwalk where he sold fruit, soda and lemonade until another door opened and he was offered a taffy stand on Applegate Pier. Fralinger decided to try to improve the recipe and tinkered with the ingredients, turning out his first batch of molasses taffy in 1885. The success inspired him to create 24 more flavors and a bulb went on in his head, thanks to his experience in the fish merchant business. He would pack the taffey in oyster boxes for tourists to take home as souvenirs. The idea was a hit and lasted all these years. Today few leave the shore without at least one of the little white boxes tucked under their arms. 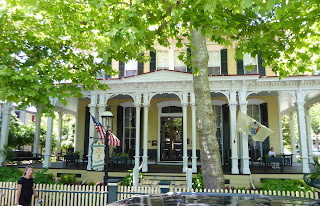 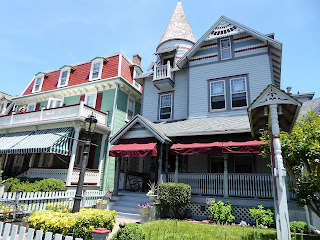 Cape May touts one of the largest existing collections of late 19th Century frame buildings in the country. A good way to get an overview of the plethora of beautiful Victorian structures is to take a one-hour, guided trolley tour. The tours, which are priced at $12 per person, run year round thanks to the  Mid-Atlantic Center for the Arts & Humanities, a non-profit that is committed to promoting the preservation, interpretation and cultural enrichment of the Cape May region for its residents and visitors.
Tickets for the Trolly Tour can be purchased at the Washington Mall Information Booth. To combine the historic tour with a one-hour tour of the Emlen Physick House costs an additional $10. Active military and veterans are offered a 20 percent discount.

A Tour of the Emlen Physick House
Despite knowing a little about architecture, I was surprised to hear a few terms with which I was unfamiliar while on the Cape May Tour. For example, the term "drunken architecture" refers to the use of a combination of styles. One example of drunken architecture can be seen at the Cape May Inn (the first picture in this blog post). Another is "Stick Architecture," a style used by architect Frank Furness for the Physick estate. Furness designed more than 600 buildings in the greater Philadelphia area in the late 19th and early 20th centuries.The "Stick" style was considered avant-garde at the time and attracted its share of attention because it stood out from other Cape May styles, which generally ranged from Italianate, to Mansard and Gothic.

Emlen graduated from medical school, but preferred instead to live the life of a farmer. He also bought and sold real estate and was known for being a vocal presence at city council meetings.
A life-long bachelor, Emlen lived with his widowed mother Frances Ralston and his aunt Emilie Parmentier at the house, which was completed in 1879. Today the estate attracts approximately 30,000 visitors per year and is maintained by the Mid-Atlantic Center for the Arts & Humanities. 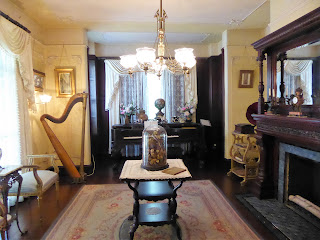 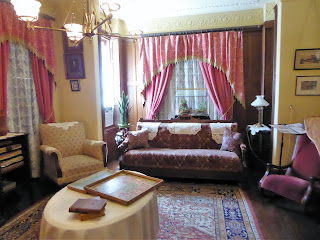 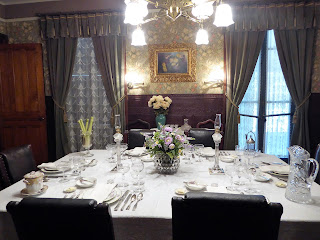 A Walk around Town
After we finished our tour, we took a walk around the area to snap a few more shots of the incredible buildings for which Cape May is known.
The impressive Congress Hall hotel loomed large in my mind during our trolley tour, particularly because I hadn't recalled seeing it on prior trips, so I made it a point to return on foot to check it out.  I learned later that the business celebrated its bicentennial in 2016 and has been recognized by Conde Nast Traveler as one of the top hotels in the Northeast. Although I wasn't a hotel guest, I managed to sneak in for a few shots.

Our last stop was to spend a few minutes walking the 2.1 mile stretch of beach before we concluded our visit with a meal and a cocktail at Fins Bar & Grille located at 142 Decatur Street.

We admired the huge saltwater aquarium at Fins before taking a seat outside on the comfortable porch and indulging in a carb-heavy, but oh-so-good dinner. I can't believe that I'm raving over flatbread, but it really was delicious. I ordered the four-cheese and my friend ordered "Fins Pie," made with jumbo lump crab, three types of cheese, arugula, avocado and lemon thyme aioli--delish!

Before we knew it, the time had come to re-board the bus. There is something to be said for having the luxury of staying overnight, but I am just glad that I had the opportunity to visit the area this summer and, of course, there is always next year. I also hear that the area is beautifully decorated during the Christmas season, so that is a possibility as well.

Activities for a Future Visit - Cape May Lighthouse and Birding

One of the things we missed during our visit due to lack of time was the Cape May Lighthouse, where guests can climb 199 steps to reach the top for a spectacular view of the area. The structure dates back to 1859 and is still working today. Since being restored by the Mid-Atlantic Center for the Arts and Humanities in 1986, more than 2.5 million visitors have climbed to the top. That's a lot of huffing and puffing. I better start working out.


Birders, in particular, may be interested to learn that Cape May is one of the East Coast's premier birding areas, attracting approximately 428 species throughout the year, with some 50,000 hawks passing through annually. Tweet! Even National Geographic gives Cape May its due in this area, listing it as one of the World's Best Destinations for Birding. The Cape May Bird Observatory (CMBO), founded in 1976 by the New Jersey Audubon, plans plenty of birding events throughout the year, including free, one-hour morning walks led by a naturalist. Coming up in October is the annual fall festival held at the Inn of Cape May (October 18-21). Learn more about the festival and the many other events held by the CMBO by visiting their website here.

Additional Cape May events can be found by clicking here. This website does a good job of keeping everyone abreast of everything Cape May, from musical events, festivals, parades, tours and more.

These are just a few suggestions for making the most of your time in Cape May, a charming area, with plenty of history and an array of activities to appeal to a wide range of tastes.
Posted by Stephanie Kalina-Metzger at 6:58 PM