Stepping Back in Time to a 1700s-era Tavern in Bedford, Pa

I'm a fan of old taverns and, as such, the Jean Bonnet Tavern located in Bedford, Pennsylvania has held a bit of an allure for me, but it just never seemed convenient to make a special trip there until recently when we decided to visit Omni Bedford Springs resort (more to come on that in a future blog post.)

Many insist that the old tavern is haunted.  For me that adds to its appeal, but as usual, I can't attest to it firsthand. I can, however, provide this link to an interesting video shot by local paranormal investigators.

The exact age of the Jean Bonnet hasn't been quite pinned down. The earliest record on the property is a title transfer of 690 acres from the William Penn family to a land speculator by the name of Hans Ireland, who then transferred it to Indian trader Robert Callender in 1762. Callender was also a commissary for troop supplies and later a scout for George Washington. Many of the features you'll see today like the tavern's stone walls, its impressive fireplaces and the chestnut beams were constructed while Callender owned the property.

The structure, which served as a respite for settlers who made their way west in wooden wagons,  is located along the Lincoln Highway and Route 31. Early on, it served as a French fort and trading post. Old accounts by trappers and traders refer to the building as being on the way to the Old Shawnese Cabins, today known as Shawnee State Park. General John Forbes was said to have stopped at the tavern to await reinforcements before continuing westward in his quest to take Fort Duquesne from the French.

In 1779, Jean (John) Bonnet and his wife purchased the property and shortly thereafter was issued a license to keep a Public House.

One of the most notable developments after the Revolutionary War was the imposition of a federal excise tax on whiskey, which enraged farmers. The "whiskey tax" was the first tax imposed on a domestic product in the United States and was part of Hamilton's plan to help pay down the national debt caused by Revolutionary War expenditures. The farmers, who would distill their surplus grain and corn into whiskey and sometimes use it in trade instead of money, met in the Jean Bonnet Tavern and raised a "liberty pole," which was a common form of protest during colonial days.
George Washington lead a group of militiamen to help quell the rebellion and many of his troops camped at the John Bonnet on their way to Pittsburgh in 1794.

Over the years, the property changed hands many times and was also used as a private residence.

Dining at the Jean Bonnet
I suggest making reservations to dine at the Jean Bonnet Tavern. When we arrived during a weekday, the place was doing a brisk business, but I did manage to snap a few pictures surreptitiously, while trying not to disturb anyone. 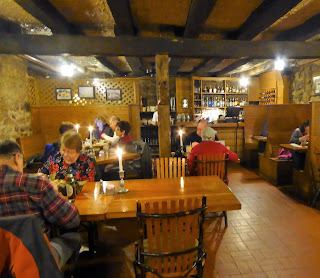 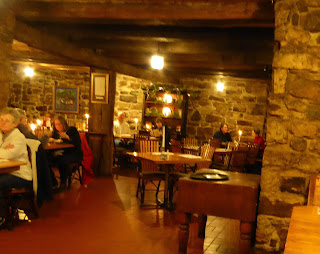 We found the low-lit atmosphere warm and inviting and if you've ever visited The Dobbin House in Gettysburg, it was reminiscent of the Springhouse Tavern. Menu items included a variety of soups, sandwiches and salads, with more substantial dinner offerings. You can view a menu here. 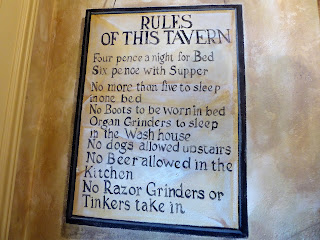 After we finished our lunch, I ventured upstairs to have a peek and was surprised to see another seating area and a rather large bar. Once again, I tried to be a bit sneaky while snapping a few pics, but this time I didn't quite succeed. As you can tell by the faces of the patrons in the pictures, they weren't very kindly disposed towards me, so the shot could be clearer, but I just found myself wanting to move on. Perhaps they were fugitives, or worse, they may have preferred to protect their identity. One item of note, however, is the impressive fireplace behind their glares.
Unfortunately I didn't have the opportunity to see any of the Inn rooms, but you can have a looky look by clicking on this link here.
On the way out, we stopped inside The Cabin Shop, which sold a selection of crafts made by local artisans, including candles, jewelry, accessories and home decor.
It might have been a cold, cloudy day when we visited the Jean Bonnet, but the atmosphere was both warm and welcoming and evidently others feel the same. TripAdvisor has awarded the Tavern a Certificate of Excellence Award for its hospitality.

Posted by Stephanie Kalina-Metzger at 8:53 PM