One of my favorite things to do when the weather turns nice is to jump in the car and hit the road to explore a nearby town, so when an opportunity to visit Chambersburg arose, I was more than happy to clear the schedule for two days to get a better sense of what the area has to offer.

What is a bit odd about my trip to Chambersburg is that despite writing a weekly article for the Chambersburg Public Opinion for a period of approximately seven years, I never spent any significant time in the area.

Oh sure, I managed to get there for a few major annual events like Icefest, which I've written about many times, and the re-creation of the Burning of Chambersburg (which I highly recommend), but taking a leisurely poke around wasn't in the cards for various reasons, that is, until recently.

For those needing a little background, the Borough of Chambersburg is located approximately 13 miles north of Maryland and is home to approximately 20,000 residents. The area is known for its rich history and more importantly its resilience after the entire town was burned down and forced to rebuild back in the 1800s.

Exploring Downtown
The walkable downtown has many shopping opportunities, but first, it may be helpful to know the parking logistics. Several lots are conveniently located around town, but most meters still take quarters, even though they appear to be modern, with kiosks and a central location for paying. You won't find me complaining about the cost, however. It's not often you have the opportunity to park in a downtown area for a mere 25 cents an hour.

Shops, Restaurants and More
When I pulled into the downtown area, not only did the mural located at 33 N. Main Street catch my eye, but I also learned that the adjacent lot provided parking that is convenient to nearby restaurants and shops at the aforementioned bargain of 25 cents an hour.
Later research revealed that the mosaic was the result of a community art project led by Philadelphia-based mosaic mural artist Isaiah Zagar--the same individual who was responsible for creating Philadelphia's Magic Gardens, a destination I've yet to visit.

While downtown, I made it a point to stop in one shop in particular. Olympia Candy Kitchen has been a mainstay in the Chambersburg area since 1903 and various musicians I'd interviewed throughout the years mentioned visiting it while performing at the nearby historic Capitol Theatre.

The business, which began as a soda fountain and candy store, has lasted through the Great Depression and World War II. They've modernized their production equipment over the years but have maintained the old-fashioned decor which harkens back to a simpler time and features hanging gas lights and Tiffany lamps. 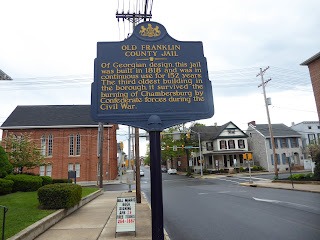 After exploring downtown, I headed out to the Franklin County Historical Society for a tour of "The Old Jail." Built in 1818, the jail was one of the few structures that survived the burning of Chambersburg by Confederate forces in 1864.

Used as a prison for 150 years, the jail is enclosed by a 20-foot high limestone wall and has housed numerous prisoners throughout the years. Docents share their stories and invite guests to inspect the cellar, which contains five-domed dungeons complete with rings in the walls and floors used for shackling prisoners.

Guides also tell the tale of Louisa Brand, who wrapped herself in a flag in a successful effort to spare her house from being burned to the ground.  The flag is displayed in a glass case in the jail. Another building of note that was spared the burning was the Masonic Lodge located at 74 South Second Street due to the intervention of a high-ranking Confederate Officer, who also happened to be a Freemason.


I found it quite humorous that one apparent recidivist inscribed this on the walls of the jail. As a matter of fact, I thought him to be quite clever. Only later did I learn that his "poetry" was borrowed from an old folk song.
The Story of Escape Artist Merle Unger

One prisoner, who gained a bit of notoriety for his skill as an escape artist, was Merle Unger, whose crimes initially included things like car theft, breaking and entering and joyriding. It was said that he would scale the wall at night to carouse. The jig was up when he was caught playing bingo by a Deputy who, also there trying his luck, spotted him from across the room. In 1975, Unger attempted to "get gone for good." He scaled the limestone wall and escaped to York, Pennsylvania. One wonders what old Merle was thinking when he wrote a letter to his girlfriend in jail and scrawled his return address on the front of the envelope! Needless to say, Merle was recaptured. That particular incarceration lasted a whole three hours. Several months later a cot was made up again for him when he was caught robbing a Carlisle ice cream store.

I learned more about Unger quite by accident.  During my jail tour, I noticed that a staff member seemed to be making progress with a book. The bright yellow paperback, riddled with bullet hole graphics, was splayed right-side up on a desk with the front and back cover showing. Intrigued, I inspected further, The title read, "American Berserk, A Cub Reporter, a Small-Town Daily, the Schizo '70s." Well, that appeared to be right up my alley, so immediately after the tour, I visited Northwood Books on North Main in a quest to locate the novel. I strolled around for a bit until I stumbled into a back room where the author was reading from the very book I was seeking, so of course I nabbed an autographed copy.

The fun part about discovering the book was that the author Bill Morris worked as a staffer at the Chambersburg Public Opinion, the very same paper for which I wrote so many articles as a freelancer. Learn more about Merle Unger, the escape artist and his ultimate fate in Morris' book, which can be found here.

A Victorian Bed and Breakfast
During my visit, I spent a delightful two days in a spacious room in a beautiful old Mansion called the "Craig Victorian," located near Wilson College.The mansion features eight comfortable guest rooms and the woodwork inside is positively stunning. My room located on the third floor was spacious, complete with an adorable little writing table in the turret overlooking the street and I would be remiss if I didn't mention the quiche, which ranks up there among the best I've ever eaten.


Brewery Suggestions
If you're a craft beer enthusiast, consider visiting Roy Pitz located at 140 North Third Street for a laid-back lunch and one of their award-winning beers, all of which are crafted on site in the basement of the repurposed three-story brick warehouse, which dates back to the 1900s.


The business is run by Chambersburg natives Ryan Richards and Jesse Rotz who joined forces to forge a business partnership. They opened the brewpub in Chambersburg in 2008 and have, to date, amassed 23 World Beer Championship medals. They most recently expanded into the Philadelphia area in May of 2017.

If you're with a group and visiting Chambersburg sometime between Thursday and Sunday, the Gearhouse Brewing Company is a fun, spacious adult retreat, which serves beer crafted on site and small plates for sharing. Customers can wrap up a busy work week by gathering at the bar, retiring to adjacent rooms to play board games, engage in a competitive game of air hockey, or simply lounge around with libations on comfy couches.

The business opened in January and is the culmination of a project undertaken by six Chambersburg natives whose passion is beer and it shows. Follow their Facebook page throughout the year to learn about upcoming events like beer dinners and live music.
These few idea should give you a start on making the most of a short visit to Chambersburg--a town that marries history with modernity and offers a little something for everyone.


Posted by Stephanie Kalina-Metzger at 9:34 PM