Learning about the Past in Historic Fredericksburg, Virginia

Visitors who enjoy history can spend days in Fredericksburg, Virginia, soaking in the tidbits from the many well-informed, friendly residents who call the town home.

The picturesque area, located about an hour from our nation's capital, features a variety of destinations designed to educate and enlighten.

I recently took a whirlwind tour the area and decided to offer a few suggestions for those who have limited time and still wish to make the most of a weekend visit.

Begin with a Trolley Tour
I always suggest taking a bus or trolley tour to get an overview of the area so you can plot your return to destinations of interest. The Trolley Tours of Fredericksburg operates year round, with knowledgeable guides who provide details on fascinating local people and important events that played a prominent part in our nation's history.

In the 1860s, four major Civil War battles were fought within 15 miles of Fredericksburg and many lives were lost during that time. During the 75-minute trolley tour, guests will learn more about those battles and view churches and buildings used by Confederate and Union soldiers.

The area is replete with historic structures--350 of which are recognized on the National Register of Historic Places and date back hundreds of years, like the St. George's Episcopal Church picture below. Built in 1720, the church features stained-glass windows installed in 1912 by Louis Comfort Tiffany. One famous scene is deemed, "The Road to Emmaus." 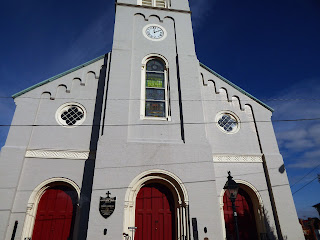 Information flows quickly, which makes it difficult to watch the world fly by AND take notes, but I did manage to jot down a few details here and there for future research.

Another stop along the way includes the Lewis Store,which dates back to 1749. Owned by George Washington's brother-in-law Fielding Lewis, (who was a member of the House of Burgesses and helped found the Fredericksburg Gun Manufactury during the American Revolution), the structure is known as the oldest mercantile shop in the United States.
The Trolley also stops in front of the Rising Sun Tavern, built in 1760 by George Washington's younger brother Charles and the Hugh Mercer Apothecary Shop, which dates back to 1771. The guide offered colorful details on how Dr. Mercer served the citizenry with treatments that were popular at the time--like leeches and lancets, for instance. Today it is open to the public as a museum.
Riders will also view the Historic Kenmore Plantation built by George Washington's sister Betty and his brother-in-law, the aforementioned Fielding Lewis. George chose to buy his mother a house nearby, which is also along the trolley route, but more on that later.

Downtown Fredericksburg is also home to many restaurants and shops, which include 90 independently owned antique stores, some of which the guide will point out along the way.
Goolricks Pharmacy, also located downtown, is worthy of a visit. I was attracted to the neon sign because I enjoy keeping up with news from the Society for Commercial Archeology, so I snapped a few pictures during my trip, only to discover later that it touts one of the oldest continuously operating soda fountains in the nation. 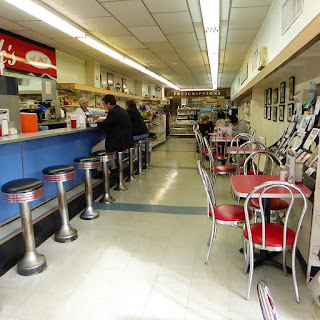 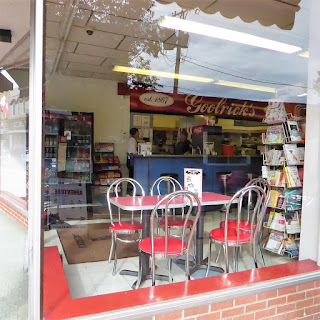 These are but a few destinations you'll see along the tour route. Trolleys run year-round and start at the Fredericksburg Visitor Center located at 706 Caroline Street. Winter tours take place twice daily at 11:00 a.m. and 1:30 p.m.

Visit the Abode of Mary Washington
The Trolly Tour also passes the Mary Washington House built in 1772 and purchased by George Washington for his mother Mary. The white frame home located on the corner of Charles and Lewis Street in Fredericksburg is within walking distance of the Kenmore Plantation, where Mary's daughter Betty lived. Mary moved there at the age of 64 and resided in the house for approximately 17 years before succumbing to what we learned later was breast cancer.

Today the public can tour the house and the garden, where Mary grew flowers and boxwoods.

Many thanks to Washington Heritage Museums for bending the rules a bit and allowing me to snap a few shots of the interior. 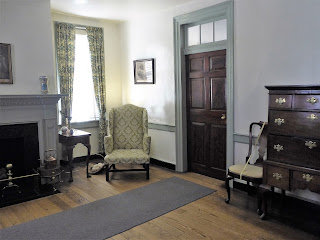 Take a Self-Guided Tour of Chatham

Chatham Manor is a beautiful and stately Georgian-style home which was once the residence of farmer-turned-statesman William Fitzhugh. It is one of just three locations visited by both Washington and Lincoln. Although built prior to the Revolutionary War, the place is most remembered for its role during the Civil War where it served as a Union headquarters, hospital and soup kitchen.

Today it stands as headquarters for Fredericksburg and Spotsylvania National Military Park. Staff volunteers greeted us at the front door and offered to answer any questions we had during the self-guided tour.

During our visit, we learned a few grisly details about the condition of the house after the war, from blood and graffiti on the walls, to damage wreaked by horses housed on the first floor.
Needless to say, the grounds and manor have been restored and guests can view a timeline of its many owners and incarnations over the years. 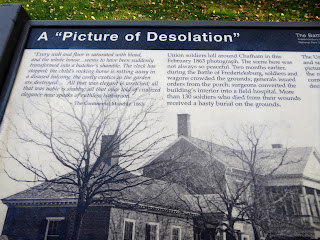 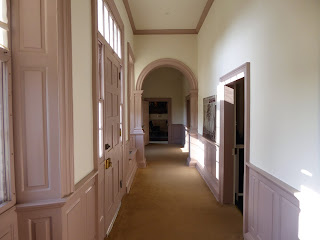 Learn about our Fifth President
The James Monroe Museum and Memorial Library is located at 908 Charles Street and contains the largest collection of artifacts and documents related to the fifth president of the United States. Relatives of James and Elizabeth Monroe believed that the small brick structure was once the site of Monroe's law office and chose the site to honor their ancestor, who was elected in 1816 with 80 percent of the electoral vote. It has since been revealed that the building is too new to have been the site of Monroe's law office, but there is no dispute that he did practice law on the same plot of land where the building stands today.

Visitors will learn that Monroe was the first president to occupy the White House after it was burned by the British in the war of 1812 and that the onus was on James and his wife to help furnish the residence. A picture depicting the incident hangs on one of the walls near a piano, which dates back to the Monroe administration and is played today during special events. 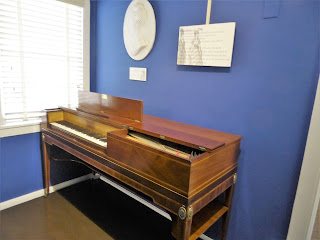 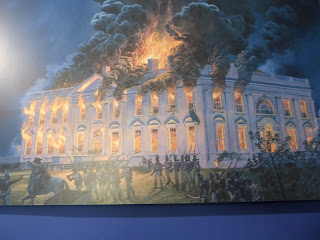 Guests get a glimpse into the life and times of Monroe by following a series of panels detailing the timeline of his life and legislation he spearheaded. Artifacts on display include the 1795 desk where the Monroe Doctrine was signed, portraits of the President during various times of his life, jewelry worn by his wife Elizabeth Monroe and a bas-relief, which dates back to 1904 and was created by sculptor Karl Bitter. It served as a template for a bronze sculpture that is now displayed at the Missouri State Capitol and depicts James Monroe, Robert Livingston and Francis Barbe-Marbois signing the Louisiana Purchase treaty. 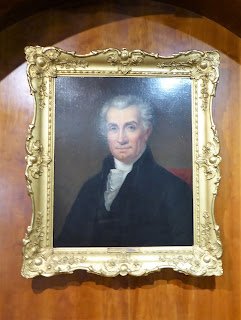 Unique Accommodations Offer a Step Back in Time
If you're seeking unique accommodations, go no further than Stevenson Ridge located in nearby Spotsylvania Courthouse, Virginia. I have to admit it was the coolest place I've stayed to date.

Debbie and Dan Spears own the 87-acre property and share a passion for antique structures. After the couple purchased the property in the year 2000, they began restoring antique cottages and relocating them to the property located near the Spotsylvania National battlefield. As of today, Dan has restored nine, updating them with modern conveniences while retaining the original character. "There's a lot to admire in the craftsmanship and artistry of these old buildings," he said.

The couple named their property "Stevenson Ridge" for a Union officer who was killed in the area in 1864 while commanding soldiers who fought in the Battle of Spotsylvania Court House.

The oldest building on the property dates back to 1732 and is deemed "The Spy Hill House." The two-story structure includes a master suite, a queen bed, two wood-burning fireplaces, a living room, kitchenette and a private patio overlooking the pond.

Additional renovated accommodations include a log home dating back to 1830, a tobacco barn, an 1812 plantation home, a corn crib and a renovated post office, to name a few.

When we learned that we would be staying at the Post Office, we couldn't help but be intrigued and I have to say it certainly gained our "stamp" of approval. When I later shared pictures of the place, people marveled how unique it was.

I'll let the photos speak for themselves. 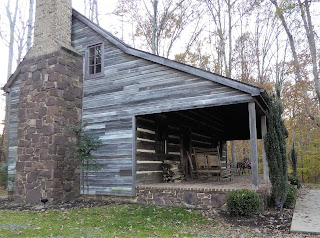 When I started writing this post, I figured that it would be short and sweet, but it turns out that there is a lot to be said about the destinations I've detailed here. There is so much more history to discover in Fredericksburg and much more to write, but I think I'll stop now, but not before I mention Hallowed Ground Tours. Scott Walker, a retired history teacher, tailors his tours to each group he engages, so whether you have a solid knowledge of history or none at all, Walker will work with you to discover your interests and provide accordant information.

My only regret in visiting the area is that we allotted so little time to get the "full-on" Fredericksburg experience. I hear the area is beautiful during the summer, and next year we intend to find out.

Posted by Stephanie Kalina-Metzger at 11:21 AM