Ports of call on the Flower Power Cruise 2016 included a stop in Key West, a small city in Florida, which is walkable at only four miles long, so we set out on a self-guided tour of the area. Our time was limited, but we did manage to see a lot in the few hours we were there before returning back to the ship. Because it was the first week of March, the weather hovered at a comfortable 73 degrees.
One of the first buildings we passed was the Key West Art & Historical Society Custom House. The landmark is an award-winning museum and home to the Key West Historical Society and if we had more time, we would have ventured inside. These cool statues out front caught my eye. 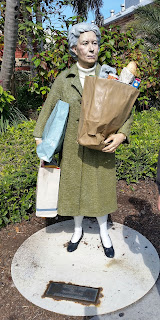 Our next stop was Mallory Square, which I understand is hopping at night. It was a good place to scout out a few bargains, from jewelry, to clothing and souvenirs. I ended up with a cute pair of sandals that cost a mere $10. The place was rather sedate that particular morning, I suspect because the "Sunset Viewing Party" is the big event of the day. During that time, street performers entertain the crowds who flock there to be amazed and amused. I found this clip of some of the regular performers captured on YouTube. Because we were instructed to be back on board the ship by 4 p.m., we had no choice but to miss the popular event, along with the Shipwreck Museum and the Aquarium also located in the complex. 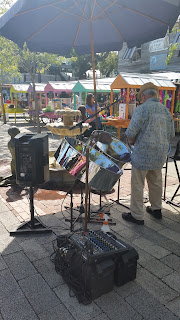 During our stroll around the island, I was impressed with the quiet beauty of the area and snapped a few pictures of the surroundings--including this house, formerly owned by Joseph Yates Porter, the first health officer for the state of Florida. Across the street, a Yuengling truck pulled up to make a delivery to the Whistle Bar, which reminded me of my home in Pennsylvania where it seems like everyone is a Yuengling fan. As we gazed up at the top deck of the Whistle Bar, we noticed a sign that read "clothing optional." My husband said he saw a topless woman through the slats. I noticed he was squinting pretty hard, but I kept it moving, ha.
Beautiful travelers palms, ficus trees and ginger blooms dotted the island. We spotted a few interesting trees as well. Shown below is a Banyon and a Kapok. Kapok trees were known as the sacred tree of the Mayans and used to make caskets and dugout canoes.
Hens and roosters are also a common site in Key West and were originally brought to the area by Cuban refugees back in the 1950's. Today, they are considered part of the area's charm. 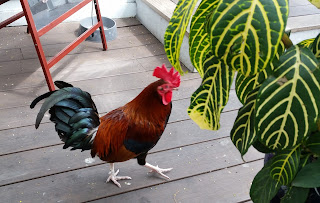 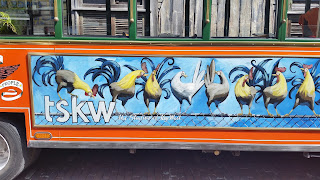 During our walk, we stumbled upon the  "Little White House." The dwelling, constructed in 1890, was home to Navy officers. In 1911, it was converted into a single family residence. Theodore Roosevelt visited in 1917, 1926 and 1939 and Thomas Edison stayed at the house for six months while working on 41 new weapons during World War II. Harry Truman used the house for 175 days during his administration and eventually the dwelling became known as the "Little White House." President Dwight D. Eisenhower conducted meetings there while recovering from a heart attack and Bill and Hillary Clinton used the house as a weekend retreat. The structure is considered the birthplace of the U.S. Department of Defense and the U.S. Air Force. Tours are conducted daily every 20 minutes from 9-4:30.
We decided to forego the "Little White House" tour due to the rather long line and because I had my sights set on the Ernest Hemingway Home and Museum located about a mile away. When we arrived, we were free to venture inside, at which time I had a few minutes to shoot a picture of the dining room and kitchen before the crowds poured in. 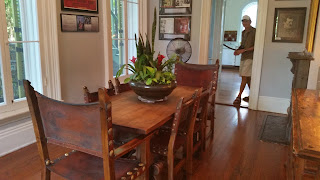 During the tour, we learned all about the Hemingway homestead and a little more about the life of the prolific writer. The house was built in 1851 and Hemingway resided there from 1931 to 1939 with his second wife Pauline. The dwelling was presented to the couple as a wedding gift from Pauline's Uncle Gus, who purchased it for $8,000. The grounds are also home to 54 descendant cats, many of whom are polydactyl and consume about 80 pounds of food a week. We learned that Hemingway was once a boxer, a bit on the clumsy side and suffered from a total of nine concussions, which may have contributed to his sometimes erratic behavior.
We also viewed his writing quarters which, in the past, were initially accessed via a catwalk from the second floor of the main house.  The catwalk no longer exists and visitors climb a set of narrow stairs resembling a fire escape to peek into the room, which is barred off to direct entry. Here the late Nobel prize winner penned works like "For Whom the Bell Tolls," "Death in the Afternoon," and the "Snows of Kilimanjaro."
The in-ground pool seen below was a bone of contention between husband and wife. According to the guide, his intention was to build a boxing ring, but when Pauline got wind of one of his affairs, she commissioned a crew to install a pool for $20,000--a mighty sum for the time and understandably so since the labor intensive project was hand dug with pickaxes. To this day, it is the largest residential swimming pool in Key West. 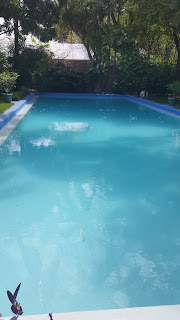 Word has it that when Hemingway learned of the cost, he tossed a penny on the ground and said, "Well, you might as well have my last cent." She memorialized the moment and visitors can view the penny embedded in the cement.

When the couple parted ways and Hemingway set off for Cuba, Pauline resided in the home until her death in 1951, after which the family decided to sell it to Bernice Dixon, who now runs the museum. Thirty-minute tours are conducted 365 days a year from 9 to 5 p.m.  Tickets (cash only) can be purchased at the door. Prices can be seen here.

As we walked down the street a few blocks from the Hemingway House, we spotted this structure with an interesting plaque out front. I researched the house a bit and didn't learn much, other than the realtor said it was built in 1928, so someone is likely pulling our legs. Last I heard, the house was for sale. 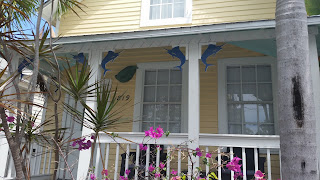 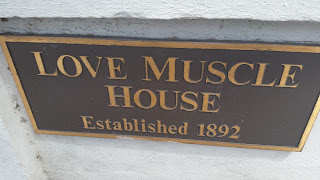 On the way back to the ship, we peeked in a few shops and I snapped a picture of the infamous "Sloppy Joes," which friends tells me is huge now, compared to 20 years ago. Here's a link to the history and a few pictures of how it looked back "in the day."

We shopped a bit on Duval Street and enjoyed lunch in the courtyard of a lovely restaurant called Bagatelle, before returning to the ship. 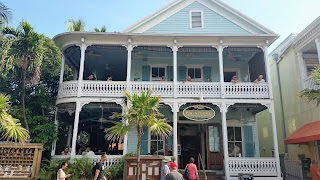 We chose Bagatelle as our lunch destination.

To learn more about travel in the Florida Keys and Key West, visit their website by clicking here.

To view more pictures, visit and be sure to "like" the facebook page here: Cheese Plates and Room Service

Next up: A little more about our brief time in Cozumel.

Posted by Stephanie Kalina-Metzger at 6:03 PM