On the Road to Doylestown

As a Pennsylvania resident who enjoys spending weekends exploring various regions, I was surprised when someone suggested a trip to Doylestown. "Doylestown, really?" I asked. I'd driven past it, but never through it, so after some research I packed my bags for a two-day visit. I was so impressed that I ended up pricing real estate in the area.

Located just 27 miles north of Philadelphia, the town rivals nearby destinations like New Hope, but compared to New Hope, it's less "Wavy Gravy" and more "James Michener," one of the many artists and writers who settled in the area.

Specialty shops line the streets of the historic downtown area, providing an array of items from antiques, to art, clothing, jewelry and accessories.

Located in the heart of the town is the Doylestown Inn, which dates back to 1902. The 11-room boutique hotel is full of charm and character, from the wall of vintage suitcases that captures guests' attention on check in, to the old phone booth located in the lobby. Our comfortable and spacious room, located on the second floor, was equipped with a fireplace and Jacuzzi and personal service is reminiscent more of a bed and breakfast than a traditional hotel.

Dining in Doylestown
Because we were staying at the Doylestown Inn, we chose to dine at the onsite restaurant, "The Hattery Stove and Still," named for a hat shop, which once operated on the premises. As with the Inn itself, special little details capture the eye like the two-story hat tree, "bowler" hat lights which hang above the bar, gilded mirrors hung on exposed brick walls, bench seating which resembles coffee sacks and a bar crafted from a 1936 Oldsmobile, which is located in the dimly lit "speakeasy" located at the lower-level bar.
Fare runs the gamut from burgers to steaks, veal, fish and pasta dishes, served in a creative atmosphere with something to see at every turn.

For a casual lunch, the Hickory Kitchen is within walking distance of the Doylestown Hotel and is a favorite of barbecue lovers near and far. It sets itself apart from the crowd by offering vegan options as well.

If there's one place you must see in Doylestown, it's Fonthill Castle, once home to Henry Chapman Mercer.

Mercer was an industrious, quirky fellow who was known as a leader in the turn-of-the-century Arts and Crafts Movement. His tiles decorate the floor of the state Capitol in Harrisburg, representing 254 scenes ranging from artifacts, to birds, insects, animals and industries.

Mercer chose concrete to build his castle due to its fireproof nature and alarmed the townsfolk back in the early 1900's by christening it with a rooftop bonfire.
The Bucks County Historical Society now owns the medieval style structure and conducts tours there seven days a week.

The castle contains 44 rooms, 10 bathrooms, five bedrooms and 18 fireplaces. Guests who step outside on the terrace will see the weather vane created in homage to the workhorse named Lucy, who helped build the structure.

During the tour, guides tell the story of the lifelong bachelor, his penchant for entertaining, his boundless energy, prolific creativity and his insatiable curiosity. Mercer's extensive tile collection is on display throughout the castle. Tiles are everywhere, embedded on ceilings, stairs, walls and many places in between.
Mercer's love of tile inspired him to found the Moravian Pottery and Tile Company in 1912. Located on the same tract of land. It, too, is open to the public seven days a week as a "working history museum." 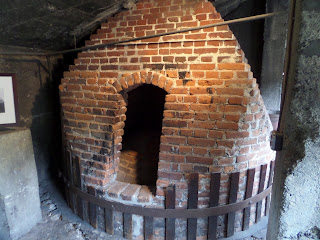 Those interested in taking the tours should check the websites and call in advance. Prepare to spend about 75 minutes viewing the castle and do wear comfortable shoes to avoid foot fatigue caused by traversing the cold, hard concrete floors.

Tool Displays Aplenty at the Mercer Museum
Also within walking distance from the Doylestown Inn is the Mercer Museum. The six-story high, concrete structure contains more than 50,000 artifacts, telling the story of American progress through tool displays.

Mercer, the original "American Picker," started the tool collection by attending auctions, rummaging through barns, attics and yards of junk dealers. Eventually word spread and collectors began contacting him and before long he had established an elaborate collectors' network.
More than 60 early American trades like blacksmithing, fishing, tanning and butchering are represented and organized in groups in rooms, alcoves and displays throughout the museum. Be sure to look up to see the larger pieces like sleighs and whaling boats that hang from the ceiling and look down to see footprints of Mercer's faithful dog Rollo. 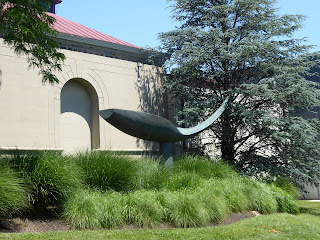 Also ocated near downtown in a 19th-century prison is the James Michener Art Museum named after the prolific Pulitzer prize-winning author. The museum features historic and contemporary American works, with a concentration on Bucks county notables.


To the left of the front entrance is a room dedicated to the late writer and featuring artifacts like his typewriter, manuscripts and ephemera that tell the story of his life.
Permanent exhibitions include outdoor art and sculpture, Bucks County landscape paintings, along with modern and contemporary art.

These are just a few of the attractions that left me scratching my head wondering why I hadn't visited Doylestown sooner.

Oh and if you stay at the Doylestown Hotel, be sure to visit the great used book store located directly across the street.

Posted by Stephanie Kalina-Metzger at 10:08 PM