A Trip to Pittsburgh's North Shore 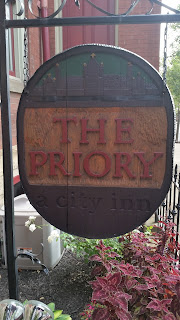 When it was time to hit the road after a successful Erie trip last week, my husband, who had graciously agreed to be my driver, suggested a pit stop in Pittsburgh to shorten the boredom of the six-hour ride home. Of course, he didn’t have to twist my arm.
He had spent some time earlier in the day researching unique places to stay in the Pittsburgh area and found just the right place, rich in both history and character.
Within three hours, we were popping the trunk on Pressley Street in front of The Priory Hotel in a little area in Pittsburgh called Deutschtown. The building, which dates back to 1888, is now home to travelers, but once served as a monastery.


Our first impression was that parking was a bit tight in the little lot reserved for visitors, which was located across the street from the 42-room inn.  The neighborhood, too, had seen better days and didn’t feel all that conducive to strolling around, at least not out front. Out back was a different story altogether (I know, weird, but more on that later).

The History of The Priory


In 1848, the area around The Priory was home to many German immigrants. Oompah bands performed outside of taverns, shops sold German specialties and breweries dotted the neighborhood. When the residents of Deutschtown decided it was time to build a church, they banded together in 1848 to construct St. Mary’s Parish, which still exists next door to The Priory Hotel.
Stained glass windows, which were installed in 1912, are described as “Priceless examples of the Munich School of Art Glass,” crafted by the Tyrolean Art Glass Company of Innsbruck, Austria. Today, the church serves as an event place called “The Grand Hall” and is a popular wedding venue.
In 1888, a Priory, (or monastery), was added to the church property as a home for Benedictine priests and brothers who ministered to the congregation. It also served as a temporary retreat for Monk’s traveling to the St. Vincent’s arch abbey in Latrobe, which was the seat for the Benedictine order in the United States.


Our first plan was to unload the bags and head to the Andy Warhol Museum located not far away from the hotel.  We were happy to learn that the shuttle at the Priory was complimentary and available to whisk us there once we settled in so we didn’t have to bother moving the car.


When we learned our room was on the third floor, we were ready to climb the stairs, but instead were directed to an elevator, which was a pleasant surprise for such a small hotel.  Our room overlooked the street and was elegantly decorated in warm shades of tan, orange and brown and it turns out the bed was quite comfortable.


After our visit to the Andy Warhol Museum (the topic of a future post), we returned to the hotel, picked up the car and it was on to Carson Street where we dined at a small Italian restaurant called the Stagioni where my husband Mike enjoyed a pork chop and I dined one of my favorite dishes--lamb Ragu with pappardelle.  I have to say I was glad I didn’t order the pork chop that tasted overwhelmingly of lemon, which didn’t match well with pork—just my humble opinion. 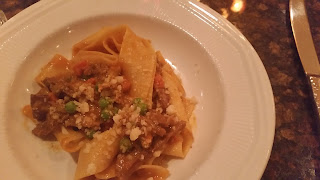 When we returned to our hotel, we spotted a small, but adorable bar near the sitting room where I was offered a tasty vodka soda with fresh blackberries. The bartender offered my husband a martini before mentioning the courtyard out back. Because the bar was so cute and cozy, we hesitated for a moment before agreeing to check it out and ended up being glad we did.
The comfy chairs on the spacious, brick porch overlooking the courtyard were perfect for relaxing on during that warm fall evening. The scene was about as serene as you can expect a former monastery to be and we had a view of the beautiful historic church which shares the property.


The following morning we dined on the complimentary breakfast of coffee, tea, yogurt, fruit and pastries.
Before we departed, we spotted a verdant garden located across the street from the backyard courtyard called Laura’s Blumengarten. A sign explained that it was planted as a tribute to the German-speaking immigrants of Deutschtown and discovering the hidden little treasure was a lovely ending to a wonderful visit. 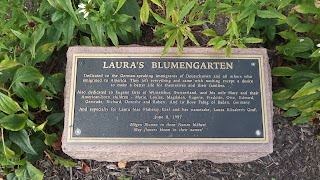 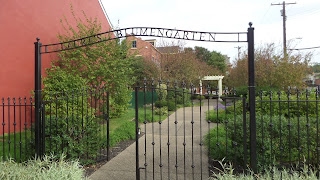 Posted by Stephanie Kalina-Metzger at 8:51 PM

Email ThisBlogThis!Share to TwitterShare to FacebookShare to Pinterest
Labels: Pittsburgh